Thomas Pieters one off the lead despite broken driver 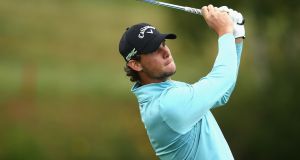 Belgium’s Thomas Pieters plays his second shot on the first during the third round of the HNA Open de France at Le Golf National in Paris. Photograph: Jan Kruger/Getty Images

After following eight straight pars by pulling his drive on the ninth into the water for the second day running, Pieters took his anger out on the offending club and saw the shaft snap.

However, the 25-year-old Belgian, who won a record four points on his Ryder Cup debut last year, immediately regained his composure to birdie the next two holes and picked up another shot on the 15th.

And the resulting 69 left Pieters on seven under par, just one shot off the lead share by Peter Uihlein and Alexander Bjork at Le Golf National, which will stage the biennial contest between Europe and the United States in 2018.

“I wasn’t trying to break my driver at all,” Pieters said. “Me and my caddie, we kind of laughed because I just put it in my bag and I think there’s maybe a soft spot in the shaft or something.

“I didn’t put it in with a lot of force and it broke. I mean, it’s my own fault and to have to play the back nine on this golf course without a driver, it’s not easy.

“I definitely took some penalty for that. I didn’t hit a lot of fairways and left myself long second shots, which wasn’t fun. I was swinging it very badly. Thank God I putted well.

“I just need to go to the range and work on some stuff and I think there’s going to be a phone call to [coach<DD>)] Pete Cowen today.

“I’m still where I want to be. Can’t really believe that I’m one off the lead with such poor play. Hopefully going to fix that and go low tomorrow, because the leaderboard is very bunched.”

A level-par 71 was enough for halfway joint-leader Uihlein to remain at the head of the field and the American will look to take inspiration from the US Open victory of his former house-mate Brooks Koepka.

“I think it was coming for BK, he’s been playing awesome,” Uihlein said. “I was excited for him. I felt like the way that course set up, it was pretty tailor-made for him.

“It was awesome to see. He striped it down the stretch and that was pretty awesome.”

Uihlein and Bjork enjoyed a one-shot lead over Pieters, Tommy Fleetwood and Andy Sullivan, whose 68 equalled the lowest score of a wet and windy day on the outskirts of Paris.

Fleetwood, who was fourth behind Koepka at Erin Hills and followed up with a tie for sixth in last week’s BMW International Open, carded three birdies and three bogeys in his 71.

The 26-year-old from Southport, who won his second European Tour title in Abu Dhabi in January, said: “It’s been a great year so far, but you have to keep it going, don’t you?

“I’ve said it all the time this year, but when you’ve had a year of struggling, you really do appreciate being in contention on a Sunday. It doesn’t get any better than this; these events, great players, great course, Sunday, trying to win it.”

Welshman Bradley Dredge is just two shots off the lead after a third straight 69, with Ross Fisher, Paul Waring and halfway joint-leader Adrian Otaegui a shot further back on five under.

Waring held the outright lead after his fourth birdie of the day on the 14th, but double-bogeyed the 15th and 18th after finding the water with his approach on both holes.

Paul Dunne closed with a double-bogey six as he posted a two-under 73 that saw him drop back to two over for the tournament.

Chris Wood struggled to a third round of 79 to lie eight over par before withdrawing from the event due to injury.

Wood wrote on Twitter: “Shame to WD from the French open today, but a wrist injury picked up in practice last week just got worse last couple of days.”