Moving tournament to Portrush in 2012, and Rory McIlroy’s involvement pivotal in saving event 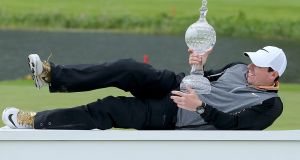 When the Irish Open was held at Killarney Golf & Fishing Club in 2010, it seemed, at the time, as if it had escaped the worst excesses of the recession. As the tournament drew to a close that summer’s evening, Ross Fisher, one of the nicest guys you can find on tour, played the role of villain in fending off Pádraig Harrington down the stretch and it was the Englishman who got to pick up the winner’s cheque for €500,000.

At a time of austerity due to the global economic crash, the Irish Open - with telecommunications giant 3 as title sponsor - had bucked a trend.

Not long after that tournament, the second of 3’s proposed three-year sponsorship deal, a bubble burst. Rather than golf, the company opted to switch its sporting interests to the Irish football team in a megabucks long-term deal with the FAI. Suddenly, the Irish Open was put in limbo, effectively placed on life support.

In 2011, the tournament - alive, but by no means beating with the same vigour as the previous year - returned to Killarney and although the MacGillycuddy’s Reeks still dominated the landscape and the lakes continued to glisten, a sparkle had been removed. The field was poorer, and the prize fund had been halved from €3 million to €1.5 million. When Simon Dyson picked up his winner’s cheque, it was for €250,000.

The primary difference was not so much the size of the cheque, but that the Irish Open didn’t have a title sponsor. In effect, the PGA European Tour, with help from the Irish government through tourism money, kept the tournament - one with the oldest and grandest of traditions on the circuit - going. The theory was that instead of a title sponsor, a number of subsidiary sponsors, akin to the Champions League concept, would be put in place. Theory and practice didn’t truly equate.

And the search for a title sponsor continued. Those who wondered about its future - at a time when Irish golfers were winning Majors, truly a golden generation with Messrs Harrington, Clarke and McDowell joined by a young buck called Rory McIlroy - were told it could never be allowed to perish. But where is the English Open now? The Benson and Hedges International? Without the lifeblood of money, tournaments can and do disappear.

The fall in the purse to €1.5 million in 2011 meant the Irish Open, in prize money terms, fell from the top tier of events on the European Tour to a middle-to-low ranking. But the numbers attending the tournament placed it at a higher level: even with that drop in prize money and the dip in quality of the field for 2011, the crowds reached 85,179 in Killarney over the four days, an increase of some 3,000 on the previous year’s figures.

With no title sponsor, that gate money - allied to the European Tour’s coffers and Tourism Ireland’s contribution - became increasingly important.

But the move to Royal Portrush in 2012, effectively creating a new rota moving the tournament North one year and South the next, provided a new lease of life. That staging of the tournament on the Causeway Coast, again without a title sponsor but with the purse increased to €2 million, started a chain of events that would invigorate Irish golf.

The crowds at Royal Portrush reached 112,000 over the four tournament days - the first ever event on the European Tour to completely sell out - and, as we know, that tournament was the catalyst for the R&A’s decision to return to the famed Dunluce links for the 2019 British Open championship.

The 2013 and 2014 Irish Opens - at Carton House and Fota Island respectively - were again staged without any title sponsor. But, by 2015, when the tournament was staged at Royal County Down, all had changed and changed utterly. Two things, not unrelated, happened: Dubai Duty Free, which has a long association with the Irish Derby, had come on board as title sponsor; and Rory McIlroy had taken on the responsibility as the tournament host.

How Dubai Duty Free came on board as title sponsors is a tale of how business and sporting networking aligns. In this case, the conduit was JP Fitzgerald, McIlroy’s caddie, who mentioned to Colm McLoughlin, the chief executive and executive vice-chairman of Dubai Duty Free, that the tournament was looking for a title sponsor.

In explaining this background connection, Galway-born McLoughlin said: “I’d had a chat with JP (Fitzgerald) and at the time they’d no sponsor and he said they were wondering if anybody would be interested. Then I spoke with Rory and he expressed his intention to host the event, which a lot of players around other Tours seem to be doing nowadays.

“Rory is very passionate about his foundation and, at that stage, I said to him ‘okay, let’s talk to the Tour’ and that’s when we started talking to them. The European Tour has an office in Dubai and Nick Tarratt is their rep there. We spoke to Nick, then we spoke to James Finnigan (commercial director with the European Tour), and then we spoke to George O’Grady (then chief executive of the European Tour) and this was all done very quickly. I said ‘okay, we’ll do it for one year’. They said, ‘do it for three years’ and I said ‘no, we’d do it for one year and test it’,” added McLoughlin.

That one year initial title sponsorship was copper-fastened into a further three year deal which started with last year’s hugely successful staging at The K Club. Dubai Duty Free has a further two-year option when the current deal finishes, which would take its sponsorship up to 2020.

The upshot is that the Dubai Duty Free Irish Open hosted by The Rory Foundation has seen its status magnified and its prize money more than quadruple in the space of six years. Next week’s tournament at Portstewart will feature a record purse of €6.3 million, and is part of the European Tour’s new Rolex Series of elite tournaments.

McIlroy’s hands are all over the upgrading, although his first year’s involvement - in 2015 at Royal County Down - taught him a lesson. That year, he was so involved in every facet of the tournament that it impacted his game and he missed the cut. “There were times where I spread myself a little bit too thin with a lot of commitments,” he admitted.

Last year, at The K Club, McIlroy took a step back so that he could focus on his golf. He won, and the €666,660 winner’s cheque was added to a fundraising night in aid of his foundation with Alex Ferguson and a percentage of the ticket sales to generate in excess of €1 million for charitable causes through The Rory Foundation.

“There were obviously reasons I wanted to get involved . . . one of those reasons was because I wanted to contribute something, where coming to the Irish Open was becoming more of a burden instead of being something that I relished and something that I enjoyed to do,” said McIlroy, adding: “So being able to get involved and not just play for myself but play for other people and help other people out, I enjoy that part of it. I want to come here. I want to help out. I want to try to make this one of the best tournaments in the world, and I feel like we’ve made a few good strides towards doing that.”

*Shane Lowry won at Baltray in 2009 but, as an amateur, he was unable to accept the winner’s cheque which instead went to runner-up Robert Rock.

1 What next for green jersey hero Sam Bennett after toughest of Tours?
2 Suarez’ Italian language exam rigged according to prosecutors
3 LeBron James has become this generation’s Muhammad Ali
4 Gerry Thornley: Talk of Anglo-French hegemony is over the top
5 Why this weekend’s Champions Cup semi-finals are still worth watching
Real news has value SUBSCRIBE