Different Strokes: German forced to take a dose of his own medicine as he loses out 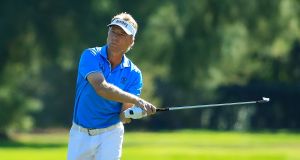 Bernhard Langer: “We voted for (the change) and that’s what it is at the moment. It was never meant to be fair. It was to be playoff. Photograph: Michael Cohen/Getty Images

Sometimes there’s no justice in sport, although Bernhard Langer - as one of the policy makers who made the decision - had no option other than to take the medicine dished out to him after missing out on the $1 million bonus awarded to the winner of the Charles Schwab trophy on the Champions Tour stateside.

Langer, you see, was unquestionably the most dominant player on the seniors circuit in the US with no fewer than seven (yes, seven) tournament wins this season to add to his ever-impressive career CV: unfortunately for the German (more than anyone!) the contrived re-jigging of points in the season-long order of merit designed to make it more interesting at the season finale meant that he was overhauled when it mattered most.

So it was that Kevin Sutherland’s only win on the Champions Tour in the season-ending Charles Schwab Cup Championship by a shot over Vijay Singh was sufficient to enable him to leapfrog up the order of merit ahead of Langer and to scoop that jackpot payday into the bargain.

Sutherland may have walked away with the trophy and the cheque, but there can be no denying that Langer - now 60 years old - was the dominant performer among his peers: he won seven tournaments in the campaign, including three of the five Majors.

If there was any bitter aftertaste left - Sauerkraut anyone? - by his failure to win the bonus money, Langer did his best not to show it . . . although it might be worth watching what happens in the review process.

“We voted for (the change) and that’s what it is at the moment. It was never meant to be fair. It was to be playoffs. Everybody in the field was given a chance to win. Is it fair? No, it’s not; but that’s how it is right now. We might revisit in the future and see if we can tweak it slightly like they tweaked the FedEx Cup points at various times,” said the German.

Harrington to make it a family affair

Pádraig Harrington had a productive two weeks at the tail-end of the PGA European Tour season - playing on sponsors’ invitations he finished tied-fourth in Turkey and tied-42nd in Sun City and augmenting his bank balance by almost €330,000 - but returns stateside to the PGA Tour this week where he is competing in the RSM Classic at Sea Island.

Harrington will be joined by Graeme McDowell and Séamus Power in the field at Sea Island . . . but it won’t be the Dubliner’s last appearance of the year stateside, as he plans to make his debut in the Father Son Challenge in Florida next month with his teenage son, Paddy (13). The fathers have to be Major champions or have won The Players to be eligible.

“The idea of entering was to get Paddy interested in the game. I know there’s some great names who have played the event, so it should be fun,” said Harrington.

“It’s not a burden. I don’t feel stressed about it. I don’t feel anxious. I just think it’s great that I’ve got the chance to win it, and a good chance.” Tommy Fleetwood on heading into the DP World Tour Championship in pole position to claim the European Tour order of merit.

“Not yet, not yet . . . I’m in a good spot both personal life and professional life” Rickie Fowler - shortly after losing out to Patton Kizzire in the Mayakoba Classic - on whether he’d consider Cancun as wedding venue.

Shanshan Feng’s victory at the Blue Bay LPGA championship in China gave women’s golf its fifth different number one in 2017, the most in a single season in the 12-year history of the Rolex Women’s World Rankings. ‘”I finished first in China, so I actually claimed the world number one (spot) in front of all the people at home,’’ said Feng, the first back-to-back winner on the LPGA Tour this season. ‘’I’m really happy about that, and I hope all the Chinese are going to be watching me ... Hopefully there will be more Chinese getting on the tours and more world number ones coming up from China.” Feng follows Park Sung-hyun, Ryu So-yeon, Ariya Jutanugarn and Lydia Ko as players who have held the number one ranking at some point this year.

“For my first season back after injury and to do it the hard way with back to back top 20s I am absolutely ecstatic to be playing DP World Tour Champs next week. Thanks to everyone who helped me get to this point!” Paul Waring on Sunday after forcing his way into the top-60 available players off the Race to Dubai rankings who qualify for the season-ending DP World Tour Championship in Dubai.

“Looks like I’m heading to Dubai for last event of the year... That was a little close.. looking forward to it now.. I love the course and should be a great way to finish 2017” Ian Poulter who finished 62nd in the Race to Dubai rankings . . . but got the final spot in the 60-man field due to the unavailability of Rory McIlroy and Henrik Stenson.