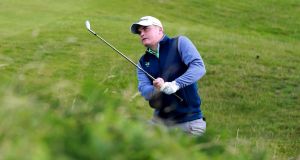 Ireland’s James Sugrue during the first round of the British Open at Royal Portrush. Photograph: Ian Walton/Reuters

There was no chance that British Amateur champion James Sugrue was going to miss his 4am alarm clock call to tee it up alongside Darren Clarke and Charley Hoffman in the opening game of the 148th British Open Championship at Royal Portrush.

His previous competitive assignment on the Dunluce Links was in the 2017 North of Ireland Championship. A dead phone battery meant his alarm never went off and it saw him forced to forfeit against Marc Norton in a first round matchplay contest.

This time around he reserved the drama for the golf course. The Mallow golfer played beautifully for large tranches of a round that saw him near the top of the leaderboard at one stage before signing for a level par 71. The 22-year-old also showed no ill effects from an infected bite on his leg that had swelled up earlier in the week.

He smiled: “I was definitely the most nervous I’ve ever been on the golf course when I looked up at the grandstand and it was packed. When Darren walked on in front of me, the roar was just unbelievable. I was very nervous for the first and the second (holes). I birdied the second and it settled me in a little bit and just enjoyed it really from there on in.

“It’s definitely lived up to what I thought it was going to be, if not surpassed it. The crowds playing yesterday (were great), but today blew it out of the water completely. Obviously Darren being from here, everyone loves him and all the fans are very respectful.”

Sugrue played alongside the 2011 Open champion in the Darren Clarke Foundation weekend at Portmarnock in 2012, something that Clarke reminded him of when chatting. The Corkman said of his playing partner: “He was an absolute gent for the whole round. On nine I had a four-footer and he tapped his putter off my back and was like, ‘roll that one in.’”

Sugrue planned to spend some of the afternoon watching his favourite player Tiger Woods before going to the range in preparation for a crack of making the cut for the weekend.