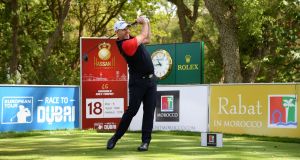 Stephen Gallacher of Scotland tees off on the 18th hole during the first round in Rabat, Morocco. Photograph: Ross Kinnaird/Getty Images

A sensational finish lifted Stephen Gallacher into contention for back-to-back victories on the European Tour in the Hassan Trophy in Morocco.

Gallacher started his opening round on the back nine at Royal Golf Dar Es Salam and was only level par after 15 holes, but then birdied the seventh, made an albatross on the next and also birdied the ninth.

The 44-year-old Scot, who won the Hero Indian Open at the end of March, holed a three iron from 240 yards on the par-five eighth for his first albatross as a professional and ended the day two shots behind England’s Jordan Smith.

“Golf is a very strange game,” said Gallacher, who revealed his son and caddie Jack played a key part in the rare feat. “He was confident on it. There’s only one club, it’s just the ball flight, I had to flight it down a little bit.

“It was 240 (yards), trying to land it 225 and run it up the green and it just came out at the perfect trajectory. I got a good bounce and thought it was going to run up to eight feet or something like that and it went in.

“First one as a pro. Just bizarre isn’t it? I’d turned away and just heard everybody shout. It’s a nice feeling because it’s a tough hole. The drive made it.”

Smith carded seven birdies in a flawless round of 66 and revealed he did extremely well to keep a bogey off his card after a testing start on the par-73 layout.

“It probably started off on the first hole, holing a 25-footer for par,” Smith said. “I mean, the first four holes I couldn’t really hit a barn door, just scrambled well, stuck in there and it all came together at the right time.

“I hit a lot of iron shots close. I think that was key for me today. I rolled it really nice. That’s probably the best I’ve putted for a long time and when I missed a green I chipped on and holed the putt. It was all about momentum for me today.”

Smith held a one-shot lead over Spain’s Alejandro Canizares and American Sean Crocker, with France’s Matthieu Pavon alongside Gallacher on five under. Defending champion Alexander Levy struggled to a two-over-par 75.

Paul Dunne’s first round 73 was the best of the Irish trio on Thursday. After bogeying the second and third holes he failed to build any momentum and two birdies on the back nine rescued par. Despite an eagle on the eighth, Michael Hoey finished one over par, as did Gavin Moynihan after double bogeys on his first and third holes.