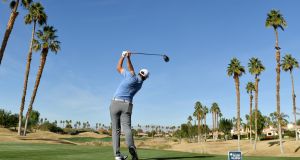 Jon Rahm of Spain drives on the sixth tee during the second round of the Desert Classic at the Nicklaus Tournament Course in La Quinta, California. Photograph: Donald Miralle/Getty Images

Phil Mickelson birdied four of his last five holes on Friday to remain in front after two rounds of the Desert Classic in southern California.

Mickelson, who came up a shot shy of a 59 in his first round played at La Quinta Country Club, carded a four-under 68 at the Nicklaus Tournament Course to move to 16-under 128, two strokes ahead of Australian Curtis Luck (66).

The tournament is played out over three courses during its four days.

Luck, who at 22 is 26 years Mickelson’s junior, was let down by a pair of bogeys on par-threes coming home, including a painful one at his penultimate hole. He rallied to close with a birdie, his eighth of the day, to stand at 14-under 130.

Steve Marino (65), who aced the par-three seventh at La Quinta, and Canadian Adam Hadwin (66) were tied for third a shot further back.

Mickelson, who played the back nine first, finished strongly after an even-par start for his first 13 holes with a double-bogey at the 18th, his ninth, the low moment. He birdied the fifth, sixth, seventh and ninth holes for a pleasing finish.

“I kind of struggled that front nine, then I doubled that 18th hole, but I ended up birdieing four of the last five and turned it around,” he told PGA Tour Radio.

“I struck the ball every bit as well [as Thursday] but I just didn’t putt anywhere close as well as I did yesterday. I putted really good.”

He wound up with six birdies as opposed to 10 birdies and an eagle on Thursday.

Ireland’s Séamus Power carded a one-over 73 at La Quinta to slip back to three over for the tournament.