Streaming the US PGA on Eleven Sports: What’s the verdict? 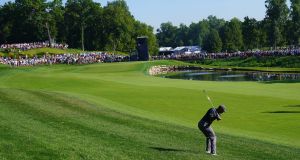 Tiger Woods plays a shot on the 11th hole during the first round of the 2018 PGA Championship at Bellerive Country Club in St Louis, Missouri. Photo: Stuart Franklin/Getty Images

When it was announced that new online broadcaster Eleven Sports had secured the rights to the US PGA Championship the news trickled out slowly. Will a third-party TV broadcaster like eir sports pick up the rights? That was a no. Will BBC show coverage on the red button like last year? Nope. Will this be on television at all? A definitive no.

And so came the scramble to work out how to watch the final Major of the year.

Do you have to enter your card details? Yes.

Can you cancel before you’re charged? Yes, but you better remember to do so yourself on Monday because Eleven Sports won’t be reminding you and, if you forget, you’ll be charged the monthly fee.

So can I watch on my television via a HDMI cable? Yes.

And my Google Chromecast? No, not available.

Why not? Just, because. So get yourself down to Power City and get your hands on a HDMI cable or else you’ll be staring at that little laptop screen all weekend.

Already this is a lot more hassle than simply picking up the remote and flicking on the telly.

And what about the pricing if I want to stay on after this week? Well, If you sign up before August 31st you’ll get a reduced rate of €6.99 a month while an annual subscription will set you back €59.99. Given the fact that Eleven have also secured the rights to Serie A – which now includes Cristiano Ronaldo – and La Liga – including both El Clasicos – this may turn out to be a long-term arrangement. But, for now, we’ll put it down as a four-day contract with the possibility of extension, sort of like a trialist at a football club – Eleven Sports are the trialist and you’re the football club. They have four days to impress, otherwise they’ll be shown the door.

So, details entered, the Eleven Sports app downloaded and it was time to watch some golf. The options stem from watching via the app on your mobile phone screen, watching on a bigger laptop screen or connecting to a television via a HDMI cable.

With our televisions mounted on brackets up on the wall it was decided that leaving the laptop dangling in the air via a cable might not be the best idea for the overall health of the computer - a problem that may well be encountered in pubs and golf clubs across the country - so the HDMI was abandoned. The laptop on the desk it would be.

Featured group coverage – including Rory McIlroy, Tiger Woods and Justin Thomas – was scheduled to start on the new broadcaster’s website at 1.30pm.

The start time came ... and went. By the time we got to 2.10pm and the ads for Spanish and Italian football were still rolling it was getting a little worrying. A quick Twitter search showed that everyone else tuning in was experiencing the same problems.

As first days at work go, the Eleven Sports Twitter administrators weren’t having a great one. As they dashed about putting out fires a quick apology was tweeted, citing problems with the feed in the US. Shortly after all was sorted and we were live and ready to go for McIlroy, Woods and Thomas teeing off.

The first lesson to be learned from this new age of streaming: if you are watching in a room with other people make sure you are all watching on the same device or else plug in your earphones. At one stage in this office there were three separate devices on the go, all operating at different times. Hearing an exclamation of “great shot” when Tiger is still standing over his ball in the trees contemplating what to do certainly takes away the element of surprise when he subsequently flips a superb wedge shot up to a few feet.

The featured group coverage ticked by tediously enough with the official stream from the US PGA becoming slightly more unbearable by the moment. But then 7pm came along and Eleven Sports’ first ever full broadcast in the UK and Ireland began.

A familiar voice to those who remember the days of PGA Tour golf on Setanta Sport greeted us when full coverage started in the form of Dominyk Holyer. Just a voice, that is, because there was no studio analysis or chat at all. Anna Whitely – presenter of Golfing World – and Seb Carmichael-Brown of the YouTube golf world (an interesting world to say the least) gave a brief welcome from Bellerive before we went straight into the American feed of full coverage.

It’s a long way from the Sky Sports shot centre, that’s for sure. Twenty minutes into full coverage and the pining for some Butch Harmon was reaching crisis point.

However, we still got post-round interviews with McIlroy, Rickie Fowler, Jason Day and Dustin Johnson among others. Some of the segments between play included Whitely guiding us through some key holes, Carmichael-Brown giving us a guided tour of “47,000 square feet of merchandising heaven” (the shop, to you and me) and a healthy amount of bookies ads. So many bookies ads. No matter what you’re watching you can’t get away from them.

Eleven Sports are doing this on a small budget and golf is not going to be a big part of their portfolio which is mainly centred on football. Having said that, during the broadcast they did announce exclusive rights to six LPGA Tour events, starting next weekend. Given the budget and all that goes with it, the coverage is fine and it’s much better than 2017’s last minute offering from the BBC which still induces the shivers when thought about too much.

You see the golf, the quality is good and the stream is not too far behind. But golf takes a long time and golf broadcasts go on for a very long time. With little or no analysis or breaks between play – something Sky Sports do so well – it can get pretty tedious. If this is supposed to get the young, stream-savvy generation interested in golf then we probably shouldn’t hold out much hope.

However, it’s the first day of a first broadcast. The news of their broadcasting the LPGA Tour shows they’re serious about golf and will give a much-needed boost to women’s golf in this part of the world while former Ryder Cup player Jamie Donaldson was also confirmed as a guest for Friday’s coverage.

An average start but already things are looking up. Perhaps this streaming thing has a future.

Resurrection beckons for Jamie Donaldson in Cyprus 16:39
Scotland end 18-year Welsh curse to finish on a high 16:31
Home comforts for Walker as he seals win for Man City 14:52
Valtteri Bottas pips Lewis Hamilton to pole position in Italy 14:47
New Zealand blow Australia away with record victory 13:22
Here is your handy guide to sport on television this week