The last few weeks have seen a lot of decision making, especially on the Olympic front 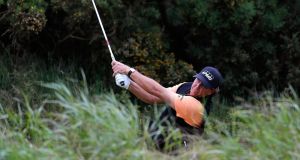 Phil Mickelson tees off on the 11th hole during a pro-am round ahead of the AAM Scottish Open at Castle Stuart Golf Links. Photo: Kevin C. Cox/Getty Images

It feels as if my life has been full of decision-making of late. The Olympics and the zika virus! Whether to defend in Akron or to go to France? In a way it’s just good to have a club in my hands at the Scottish Open this week, and to be back playing on links terrain where you accept the bounce of the ball for what it is and you don’t have to second-guess yourself.

In the week before the British Open what you don’t want is a course that beats you up physically and mentally.

Castle Stuart Golf Links just outside Inverness is a friendly, wide open course which I feel is ideal preparation for next week’s Open championship at Royal Troon. There’s nothing too stressful, and scoring is normally quite good, which makes it a great warm-up tournament with an eye on the Open.Yet it’s also a big tournament in its own right, with plenty of world ranking points too. It’s a title I’d love to win.

My defence of the WGC-Bridgestone Invitational last week didn’t go as planned. Yet there was improvement day-to-day, and I feel my game is good and strong coming into this stretch which for me will take in the Scottish, the British, a week off, and then the US PGA Championship.

I got off on the wrong foot at the Bridgestone. For starters I had a late tee time on Thursday. Sometimes when I travel to the United States my body clock doesn’t adjust because I’m waking up too early and I struggled in the first round.

I didn’t play great. My short game wasn’t firing, and I just didn’t get anything out of the round. I would have preferred a better finish than tied-36th, that’s for sure, but I was happy with how I improved as the week went on.

I’m actually playing with Thongchai and Phil Mickelson for the first two rounds here in Scotland, and I’m looking forward to playing links golf, which I love.

Even for me it’s not as straightforward as you’d imagine in switching back to links. The wind plays a lot heavier than in the US, and you’ve got to play with feel.

You could be hitting a five-iron or six-iron on a 140 yards shot when you’re used to hitting wedge or nine-iron that distance. If you get the ball spinning into the wind you struggle. It’s those type of shots that are the hardest to get your head around. It’s more mental than anything else.

The Scottish Open is a big week in itself, one where I want to do well. I haven’t been to Troon yet, didn’t pay any advance visit there.

I will think about Troon on Monday, when I get down there. I get very excited about the Open, but I have to put it on the back-burner for the next few days. I’ll only start thinking about it when I’m driving down there on Sunday night.

The decision over the Olympics was one that has been on my mind for a while. I’m relieved I’ve made the decision. I’m not alone, there’s been a number of us who have taken the same decision.

There’s been a few comments putting us down and I think that’s unfair. We’re professional sports people and we’re human beings at the end of the day, and we’re entitled to make decisions we believe are the right ones for us.