From The Back Pages: The 1949 Ryder Cup was not short of controversy in the build-up 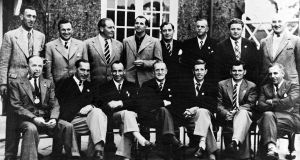 It was Friday, September 9th 1949 when the SS Queen Elizabeth docked at Southampton and nine of the greatest golfers in the world disembarked alongside their captain Ben Hogan, their wives and half a ton of meat.

Times were tough in Britain, and indeed in Ireland, and the American Ryder Cup team members were seen as rich and glamorous superstars from a faraway land of money, opportunity and an abundance of food.

On the same day that the Ryder Cup started at Ganton Golf Club in North Yorkshire, The Irish Times speculated on the “serious concerns for Ireland” brought about by the devaluing of the British pound by 30 per cent at a time when post-war rationing was still in place and the 26 counties were only five months on from officially being declared a Republic.

This whole Ryder Cup business was far from the most pressing matter on the minds of a people still reeling from the effects of World War II but, but for the golfing community of Ireland, this was the time of the pioneer that was Fred Daly.

The Portrush man had become the first Irishman to win the Open Championship two years earlier and was now about to become the first golfer from this island to play in the Ryder Cup on home soil, after he had made his debut in 1947 when the USA won 11-1 in Oregon.

It was 16 years since the British team (not formally named Britain and Ireland until 1973) had lifted the trophy but the competition had only been played three times since then because of the war.

The USA team did not quite know what to expect in travelling to a country still rebuilding after the havoc wreaked by the Luftwaffe and so, to be safe, they decided to bring along 600 steaks, six hams, 12 sides of beef and four boxes of bacon to sustain themselves and their wives for the month that they would spend on this side of the Atlantic, while also leaving some to share with the poor starving British team.

Inevitably this became quite the story among the British press with ‘Meatgate’ quickly becoming the hot topic of conversation in the build-up to the matches. It was something that greatly irked US captain Hogan who couldn’t understand why it was such a big deal.

“Every time I pick up a paper I read about that meat,” Hogan said before the event. “I can’t even find any golf news. Next time I guess we’ll have to leave our clubs at home and just have a meat show. You don’t go around every day printing what Lord so-and-so had for lunch, or tea or dinner and I don’t get your angle. Those steaks and hams have been in your papers for 12 days now.”

While Hogan was a man of few words he was, apart from the meat, the biggest draw that September week. A year previous he had won the US Open and the PGA Championship and was one of the most famous players in the game but had only recently survived a near-fatal car crash when a Greyhound bus ploughed into his Cadillac on a misty February night in Texas.

Hogan had only just been released from hospital and was still months away from even swinging a golf club again. British golf writer Louis T Stanley recalled in Curt Sampson’s biography of Hogan that “the road smash in which he had nearly been killed had left its mark, both psychologically and physically. I drove him from Southampton to London when the team arrived but every oncoming car so tensed his nerves that we reduced our speed at times to a crawling pace.”

Eventually the US team made it to North Yorkshire but the pre-event controversy was not over.

The night before the match began, Hogan made a formal complaint about the depth and spacing of the grooves on some of the British players’ irons. One of the players in question – Richard Burton – had been hollowing out little holes in his dot-marked wedge with a drill in order to provide a bit more control for shots to the green on what was a baked out golf course after a warm summer. The British team eventually agreed to change and play with the same grooves as the US team and so, finally, the golf could begin.

Little was expected of British Ryder Cup teams in those days, such was the strength of the Americans, and indeed the Pathé news report after the matches described it was “yet another act in the oft-seen drama ‘Britain the world’s best losers’”.

But this British team – fuelled by American meat the likes of which they had never eaten before – were out to cause an upset and they very nearly did with Daly at the forefront.

On the opening day Max Faulkner and Jimmy Adams got the home side off to the perfect start by beating Dutch Harrison and Johnny Palmer two and one. That paved the way for Britain taking a 3-1 advantage from the day’s foursomes with Daly partnering Ken Bousfield to a four and two win over Bob Hamilton and Skip Alexander.

“The Americans are now thoroughly up against it; for they must now secure six of today’s eight matches for victory,” reported The Irish Times the following day. “In a day of terrific thrills and excitement, with 8,000 spectators thronging the fairways and stampeding for vantage points, Fred Daly, with his young partner Ken Bousfield, Dick Burton’s brilliant assistant, contributed a win to the British roster.”

The home side were on the verge of claiming the trophy for just the third time in its history but then the weather turned in favour of the visitors. Heavy downpours on Saturday night softened up what had been a hard and fast heathland course, transforming it into the much softer and greener type of track that the Americans were used to.

And they took full advantage. Adams and Welshman Dai Rees got two points on the board early for Britain to make it 5-3 with four matches still out on the course. Now, with just one and a half more points needed, a home win was a real possibility and it looked like it could all come down to Daly who was out in the last match against former US Open champion Lloyd Mangrum.

With Burton already ahead against Clayton Heafner, Daly got his game back to all square with nine holes to go. But then the Americans turned on the style. Heafner won four holes in a row to close out his match against Burton while Mangrum blasted Daly aside with four birdies on the spin to win four and three despite the Irishman playing the 33 holes in eight under par.

“We have reached the stage now where nothing is incredible, apparently, of American golf but the terrific effort made in superlative terms of both battle and brilliance by the US team on this occasion will be long remembered,” reported The Irish Times.

The American team hung around for a month to play in the following week’s Matchplay Championship as well as some exhibition games. It would be another eight years before Britain would reclaim the trophy again when Harry Bradshaw and Christy O’Connor Snr represented Ireland. Daly’s appearances in 1947 and 1949 had shown that the Ryder Cup was extending beyond just England, a fact summed up by a report in The Scotsman newspaper after the competition.

“As I de-badged myself tonight for what was officially described as ‘England v America’, I reflected that a Scot and a Welshman had given us our only singles points and that the last one, though we did not get it, depended on an Irishman.”