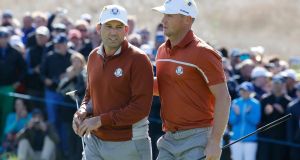 The 42nd Ryder Cup features all of the world’s top 10 for the first time, but you might not have known it watching one particular hole on Saturday afternoon.

Webb Simpson and Bubba Watson started in style with a birdie to win the first hole of their foursomes match against Sergio Garcia and Alex Noren, only for Watson to hit his tee shot on the par-three second into the water.

Advantage Europe you would think, only for Noren, who won the French Open at Le Golf National in July, to follow suit.

Things went from bad to worse for the Americans when Simpson amazingly hit the next shot into the water as well from the drop zone, with Garcia only just clearing the hazard with his attempt.

Advantage Europe once more it seemed, but after Watson hit his team’s fifth shot to 25 feet, Simpson holed for a triple-bogey, Noren fluffed his chip and Garcia was unable to hole from 15 feet.

“Hole halved in six, the United States remain one up,” announced the match referee. Not a phrase you would expect to hear too often.