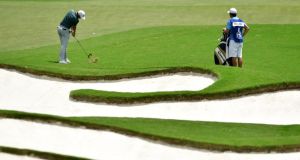 Rory McIlroy plays a shot on the third hole during the third round of the PGA Championship at Quail Hollow. Photo: Stuart Franklin/Getty Images

“I’m looking forward to 2018,” admitted Rory McIlroy with a resignation that accepted the reality that his race is already over before it is fully run in this 99th US PGA Championship at Quail Hollow, where he - and Shane Lowry - was left lost in the wilderness as others eyed the Wanamaker Trophy.

Both McIlroy and Shane Lowry were locked together on four-over 217 at the 54-hole point, a distance behind leader Kevin Kisner with Chris Stroud and Hideki Matsuyama - who each won on tour just a week ago - Justin Thomas and Louis Oosthuizen the main players in trying to close the deal.

On a hot, sticky day - one of dreadfully slow rounds with the final group taking five hours and 40 minutes to negotiate their way around the Tom Fazio remodelled course - Kisner’s 72 for a total of 203, seven-under, gave him a one stroke lead over Stroud and Matsuyama.

Jason Day was right in the mix teeing off the 18th but the Australian’s bid for a second PGA Championship title fell apart with a quadruple bogey eight, a horror hole that combined a poor swing off the tee with some terrible decision making. In one hole, Day fell from sixth to 16th, from four-under to level-par for the championship.

And McIlroy, also aware that he has ground to make up in defence of his FedEx Cup title which reaches the serious playoffs stage in a fortnight’s time, admitted the rib injury which has seriously disrupted his season is still limiting the amount of work he can put in.

“It’s not a factor when I’m out on the course but it’s a factor when I’m off it in terms of how much I can practice and how much time I can put into it. So it’s tough. It’s Catch-22 because I want to play and I can play but I can’t put the practice in that I need to, to maybe get myself up into contention.”

He added: “We’ll see where I go from here, I’ll play (Sunday), assess my options for the rest of the year. I’ve still got a few big tournaments left, it’s just whether I play in all of them or I take a little bit of time off to try and get 100 per cent healthy.”

McIlroy’s third round 73 was again a frustrating one for the Northern Irishman, who claimed they’d made the course more difficult than normally found on the regular tour. “So the goal now is I want to sign off on a positive note. It hasn’t been the week I wanted to. If I can finish in the red (on Sunday), that could be a top-10. That’s a hollow victory in some sense but at least I would sign off on a positive note.”

For Lowry, the highlight of his round was an eagle three on the Par 5 seventh but, for the most part, he was consigned to the role of onlooker to the heroics performed by playing partner Graeme DeLaet who produced a run of birdie-eagle-eagle-birdie from the 13th.

Lowry’s 74 for 217 left him in tied-47th position. “”I’ve got a lot to play for tomorrow, a lot of FedEx Cup points to play for. Even coming down the last that’s all I could think of, put a couple of good swings on it I just need to go out and keep playing like I’m playing, if I play like this for the rest of the year I’ll be alright.”

Kisner, with strong family ties in the Charlotte area, although resident across the state line in Aiken, South Carolina, watched Day’s horror show down the last and almost had one of his own as his approach shot only avoided finishing in the creek by hitting the footbridge across the hazard. The ball finished in thick rough, but - unlike Day - he salvaged the situation by limiting the damage to a bogey. It gave him a one shot lead over Stroud, winner of the Barracuda Championship last week, and world number two Matsuyama, who won the WGC-Bridgestone Invitational in Akron.

“I’ve dreamed about this for years, so it’s in there. I know all these guys are going to be super nervous. I’m sure I will be, too. But (winning) last week, just gave me an unbelievable sense of calm. I’ve never felt so relaxed on the golf course and I think it’s a lot of reason why I’m playing so well,” said Stroud.

Kisner, though, is the man to be caught.