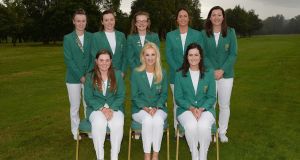 Ireland won the ladies home international golf title for the first time since 2004 when they overcame reigning champions England by the narrowest of margins in a nail-biting finish at Little Aston on Friday.

It was a gripping final 90 minutes before Ireland finally got over the line 5-4 to spark major celebrations.

The teams were level 1.5-1.5 after the morning foursomes but for much of the afternoon England had their noses in front - until youngster Annabel Wilson won two late holes against Sophie Lamb and Mairead Martin levelled matters with Olivia Winning at the 16th after trailing for most of her match.

Martin halved the final two holes to secure the vital half point that gave Ireland victory and Wilson defeated Lamb by two holes.

There was heartbreak at the same venue for Ireland’s girls who surrendered the crown they had won at Conwy last August when they went down 6.5-2.5 to England.

The damage was really done in the foursomes when they lost two of the three matches and managed only a half in the other tie.

And when Castlewarden’s Lauren Walsh was beaten 6&5 by Hollie Muse in the top singles clash the writing was on the wall.

Rachel Thompson and Beth Coulter could only halve and when Valerie Clancy was beaten out in the country by Martha Lewis it spelled the end for Ireland.

Emma Forbes, from Royal Portrush, was the only Irish singles winner with the English side far superior on the day.

Scotland defeated Wales, also by a 6.5-2.5 margin, to take third spot behind England and Ireland.

Meanwhile, Portmarnock’s Adrian Morrow left his best until last in the Seniors Amateur Championship at Sunningdale. Morrow, the only Irishman to survive the cut, posted a 70 for a 221 total.

That left him in a tie for 13th place, albeit seven strokes adrift of the new champion Brian Hughes.

All in the Game: Beans didn’t provide the magic for Crouch 10:00
Kansas City Chiefs to meet San Francisco 49ers in Super Bowl 09:12
Coco Gauff beats Venus Williams again in Australian Open 08:35
No sign of ring rust as Roger Federer starts fast in Melbourne 08:38
Leinster to meet Saracens in Europe, Corofin and Ballyhale make history 08:20
Here is your handy guide to sport on television this week