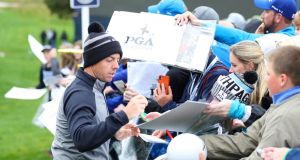 Rory McIlroy signs autographs during a practice round prior to the 2019 PGA Championship at the Bethpage Black course in Long Island, New York, on Monday. Photograph: Warren Little/Getty Images

The problem for Rory McIlroy is one of having to walk on eggshells. Damned if you do; damned if you don’t. In reaffirming his original intention to represent Ireland in the 2020 Olympic Games in Tokyo, the Northern Irishman has, it would seem, taken a more surefooted approach than when he first took the decision back in 2014.

Of course, McIlroy never made it to Rio de Janeiro for the 2016 Games. The zika virus, borne by mosquitoes, provided a rather convenient escape route and, if we’re honest, it never really seemed that his heart was ever in it. After all, he’d never grown up dreaming of an Olympic gold. For him, it was about claret jugs, green jackets, the Wanamaker and US Open trophies.

And, for sure, it still is about those Majors. Not just for McIlroy, but for all those elite golfers, from all over the globe, who believe the four Majors represent the pinnacle of their sport.

Yet, McIlroy has gone from questioning why golf was ever made an Olympic sport to realising that it is one. He has had, and is entitled to have, something of a change of heart on that viewpoint.

“No matter what your feelings are towards what sports should be and shouldn’t be in the Olympics, it is not up for me to decide. Seeing golf is in the Olympics and I am one of the best players in the world, I think it is a cool thing to go,” he said.

But he hasn’t had a change of mind about who to represent: Ireland.

And, as McIlroy spoke to us here at Bethpage Black ahead of the US PGA Championship, there was clarity and maturity in the words he used to explain why there would be no change of mind. He conceded “it is a sensitive landscape I have to try and work”. He has seen how rugby players and hockey players and others have successfully managed to negotiate such pathways, and – in fairness – he also revisited his own pride at representing Ireland in his amateur days.

“So then obviously when you put the Olympics into the equation and then there’s a choice to be made, you really have to start thinking, okay, well, what are your beliefs and your values? It makes you sort of have to delve a little bit deeper. It’s not just a superficial decision. It’s something that you have to really believe in.”

McIlroy took some hits, many on social media but also in mainstream media, for his decision not to play in this year’s Dubai Duty Free Irish Open at Lahinch. Those attacks were unfair, given how he’d re-energised the tournament in his role as host, but also because his eyes – understandably – this summer are focused on the 148th British Open at Royal Portrush, and his sights and preparations are all about gearing up to that championship.

Those Majors – just like this week’s PGA – are what remain the priority; but surely it is great news for Irish sport, and Irish golf, that McIlroy has pencilled in the Olympics so far in advance. There was genuine enthusiasm in his talking of reacquainting with Neil Manchip, the GUI national coach who is set to manage the team in Tokyo, and also of playing alongside Shane Lowry or Séamus Power or whoever the second Irish qualifier would be.

Golf’s return to the Olympics in Rio saw many male players, among them McIlroy and also Lowry, stay away due to concerns about the zika virus

As it happens, the Olympic qualifying is a long time under way. It actually started back in July 2018 and concludes on June 22nd, 2020 for the men, after which the top 60 qualifiers will secure their places. McIlroy is currently fourth in those rankings; Lowry is 21st. As of now, both are Tokyo bound for a 72-holes tournament scheduled for the Kasumigaseki course in the city’s suburbs from July 20th to August 2nd.

Golf’s return to the Olympics in Rio (for the first time since 1904) saw many male players, among them McIlroy and also Lowry, stay away due to concerns about the zika virus. But those who did go, among them gold medallist Justin Rose and silver medallist Henrik Stenson, ensured a successful return and, going forward, it will feature on players’ wish lists.

Those players who travel to Tokyo will be doing so with a measure of inconvenience. It will involve playing in the British Open at Royal St George’s, followed by playing in a WGC in Memphis (missing the Olympic opening ceremony) and then routing on to Tokyo for a tournament squeezed in ahead of the PGA Tour’s FedEx Cup playoffs.

“I’ll go to Japan and try my best to win,” said McIlroy.

What more can you ask of anyone?