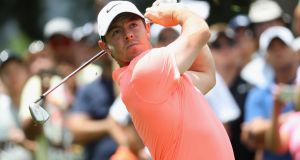 Rory McIlroy is hopeful of a return to action at the beginning of March at the WGC-Mexico Championship. Photograph: Warren Little/Getty Images

Rory McIlroy does not expect to be back in action from a rib injury until the WGC-Mexico Championship in March – just a month before the Masters.

Speaking to The Clubhouse Pod with FOX Sports, the 27-year-old said: “I am trying to get back for Mexico, that’s my timetable for return.

“I could maybe get back before that, but if I were to play Honda (Classic in Florida) and then go straight to Mexico, that would be playing two weeks in a row.

“I would like to ease my way in gently.”

Despite being in pain, McIlroy had competed in the 2017 BMW SA Open, where he finished runner-up after losing a play-off to England’s Graeme Storm.

The Johannesburg event, which ran from January 12th to 15th, was his only action since wrapping up last season with top-10 finishes at the WGC-HSBC Champions and the World Tour Championship in Dubai.

Following tests after the end of the tournament, it was confirmed McIlroy had suffered a stress fracture of a rib and was advised to rest.

The enforced lay-off means McIlroy could now be back in action just a matter of weeks before the start of the Masters at Augusta, which begins on April 6th and is a competition in which the four-time Major winner has yet to triumph.

McIlroy, though, believes the planned recovery schedule to compete at the Club de Golf Chapultepec tournament, which finishes on March 5th, will give him the best chance of progress.

“Mexico is the perfect time to return because its four rounds, no cut. I can see how everything feels and have a week off after that,” he said.

“Hopefully it works out that way and that’s when I am trying to get back.”