Meanwhile, hopes high for Irish on Challenge Tour and Els backs Tiger for another major 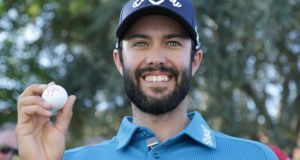 Adam Hadwin of Canada poses with his ball after shooting a 59 during the third round of the CareerBuilder Challenge at La Quinta Country Club, California. Photo: Jeff Gross/Getty Images

The simplicity of golf is that it is a straightforward numbers game, where the lower the score the greater the reward. It’s all about going low with the aim of winning but also, for players, there is that magical number – 60 – to be broken, an affirmation of a special place in the sport.

If Adam Hadwin became the latest player on the PGA Tour – and the first Canadian – to post a round of 59, just a week after Justin Thomas had performed the accomplishment in Hawaii, the remarkable thing is that the feat has never yet been performed on the PGA European Tour. The 58 posted by American John Hahn at qualifying school in Catalunya was a feat in itself but doesn’t count officially as that European breakthrough moment.

For sure, there have been close calls on the main European circuit, most notably perhaps by Darren Clarke who not once, but twice, signed for 60s: firstly, in the 1992 Monte Carlo Open when he was but a slip of a lad; and secondly, on the monster that was the Palmer Course (now the Ryder Cup course) at The K Club in 1999, when his birdie putt for a 59 on the ninth, his finishing hole, agonisingly refused to drop.

In the recorder’s room some minutes later, Clarke allowed himself a wee smile when he was handed his card by his marker Ian Woosnam. Clarke noticed that the Welshman had totted up the respective nines to 30 and 29, a combine 59. “Thanks very much Woosie, but I had a 60, not a 59,” Clarke pointed out. If only, and all that. . . .

Anyway, that quest for a sub-60 on the European Tour is an ongoing one, even if the magic number has been broken on the PGA Tour by eight different players with Jim Furyk having the temerity to perform the feat twice: firstly shooting a 59 in the 2013 BMW Championship and, then, signing for a mind-blowing 58 in last year’s Travelers Championship.

That 58 by Furyk is the record low score on the PGA Tour, while Japan’s Ryo Ishikawa also shot a 58 on the Japan Tour in the Crowns Invitational last year.

Clarke’s two 60s remain the lowest rounds recorded by Irish players on the main tour, although Rory McIlroy and Padraig Harrington have each flirted with breaking the sub-60 mark: McIlroy posted a 61 in the Wells Cargo Championship at Quail Hollow in 2015, while Harrington was on a 59 alert for a time in the 2012 Transition Championship before finally having to settle for a 61.

“I think everybody talks about kind of they were in a zone and I think that’s kind of what happened,” remarked Hadwin after becoming the latest player to break 60 on the PGA Tour. Unfortunately for the Canadian, he failed to put the icing on the cake by going on to win the actual tournament.

Although last season proved to be a rather dismal one for Irish players on the Challenge Tour, which has proven itself to be the best gateway for aspiring professionals on to the main tour, hope springs eternal that this year will be different.

And the new Challenge Tour schedule, which features two Irish tournaments, the Northern Irish Open at Galgorm Castle in August and the Volopa Irish Challenge at Mount Wolseley in September, will at least ensure that players like Gary Hurley, Jack Hume, Gavin Moynihan, Jeff Hopkins et al will have some home comforts in their quest for cards.

The enhanced Challenge Tour – featuring 26 tournaments in 20 countries, culminating in the Grand Final in Oman – will start with the Kenya Open in March. Two new tournaments have been added to the schedule, the Portugal Open at Morgado which is a dual-ranking event with the main tour, and the Match Play 9 in Spain which will be the first matchplay tournament on the secondary circuit for 18 years.

“In keeping with our motto of ‘where heroes are made’ the Challenge Tour continues to bring through the brightest young talents in the game, while also growing our sport across the world,” said Alain de Soultrait, Challenge Tour Director, who used the rapid progression of Jordan Smith as an example of how player can develop.

He said: “In just ten months Jordan Smith has gone from being a Challenge Tour rookie, to topping the Road to Oman Rankings, to playing alongside four-time Major champion Rory McIlroy and challenging for a European Tour title, and is now one of the top 100 players in the world. He is proving to be one of our many success stories, reinforcing the view that the Challenge Tour is the best breeding ground for young players, and helps mould them into future stars.”

Ireland is overdue a player progressing from the Challenge Tour if the truth be known: although the developmental tour started back in 1998, the roadway onto the main circuit has proven to be a rocky one for aspiring Irish players with only Peter Lawrie (2002), David Higgins (2000 and 2005) and Gareth Maybin (2008) managing to secure full tour cards.

150/1: Pádraig Harrington, a three time Major champion, and Séamus Power, a rookie on the PGA Tour, have one thing in common heading into the Farmers Insurance Open at Torrey Pines this week: they’re both rated as 150/1 shots to win the title, where world number one Jason Day marks his seasonal debut.

15/90: Pity poor Greg Eason, after the Englishman finished his second round of the Bahamas Great Abaco Classic on the Web.com Tour with a decuple 15 on the Par 5 18th hole to sign for a 90. He missed the cut!

“There have been a few cases where we have won Majors in our 40s. It doesn’t happen that often, but it does happen. If players like myself, Darren Clarke and Mark O’Meara won in our 40s, surely Tiger thinks he can do it. I am sure it’s on his agenda” – Ernie Els on whether Tiger Woods can add to his career haul of 14 Majors on his return to the Major stage this season.

“I know a lot of people are disappointed, but I’m not!” – Bernhard Langer after winds gusting to 45 miles per hour forced the cancelation of the final round of the Mitsubishi Electric championship in Hawaii, the first event of the season on the Champions Tour. Langer had started the final round a shot clear of Fred Couples, which gave the German a 30th career title on the seniors’ circuit.

“Well that was fun!! Can’t thank everyone for the kind words....” – Hudson Swafford on his breakthrough win at the aptly named CareerBuilder Challenge.

“Ah come on Fitzy, sort yourself out!” – Shane Lowry apparently unimpressed with the car in Matt Fitzpatrick’s driveway. No Ferrari, BMW or Merc for the down-to-earth Englishman. . . a good, honest Ford Mondeo!

“To all those who doubted the decisions I’ve made ........” – Point made and enough said, byAbu Dhabi winner Tommy Fleetwood.

Q: A player mis-hits his approach shot but the ball comes to rest on the putting green. The player marks the position of his ball, inspects it and throws it into an adjacent lake from which it cannot be retrieved.

A: The player was entitled under Rule 16-1b to lift his ball without announcing his intentions. However, when he threw the ball into the lake, he deprived his opponent, marker or fellow-competitor of the opportunity to examine the ball and dispute the claim of unfitness, and he made it impossible to replace the original ball should such a dispute be resolved against him. Accordingly, he incurs a penalty of loss of hole in match play or two strokes in stroke play for a breach of Rule 5-3, but he may substitute another ball to complete the hole.