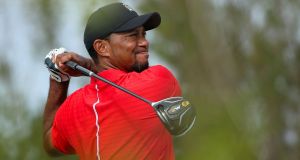 Tiger Woods admits he is concerned about the schedule he has set himself as he prepares to return to competitive golf full-time.

The 41-year-old made a gentle comeback from 16 months out with injury when he tied 15th in the 17-man Hero World Challenge last month.

However, the real test will come over the next five weeks when he will play four full tournaments, including a long trip to the Middle East for the Dubai Desert Classic.

“That is a concern, no doubt about it, but I’m also looking forward to it,” he told a press conference at Riviera Country Club where he was promoting the Genesis Open, which will make up the third of his four events.

“I’ve sat out long enough here. Got my body in a pretty good state where I feel I can handle that workload but I still gotta go out there and do it.

“Feeling good about it and doing it is two totally different things.”

The 14-time Major winner kicks off his season on Thursday in the Farmers Insurance Open at Torrey Pines in San Diego, one of his favourite courses where he has won eight times as a professional.

After flying to Dubai he will have a week off before playing the Genesis Open in Los Angeles for the first time in 10 years and then finishing with the Honda Classic near his Florida home.

Woods has a point to prove and – although he made the most birdies of anyone in the field in last month’s comeback – he knows he must do it over a sustained period.

However, he does not feel any pressure to restore his reputation.

“I’ve won a few times on tour and a few Majors,” Woods added.

“I know either way I’ll be a part of golf history with what I’ve done.