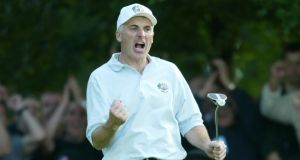 Philip Price of Europe celebrates on the 16th green after a 3 & 2 victory over Phil Mickelson during the final day singles of the 34th Ryder Cup matches between Europe and the USA at the De Vere Belfry in Sutton Coldfield, England on September 29, 2002. Europe won 15.5 to 12.5. Photo: Jamie Squire/Getty Images)

European captain Sam Torrance sidled up to Philip Price on the putting green ahead of the Sunday singles in the 2002 Ryder Cup at the Belfry and told the Welshman that he needed something from him that day. “I need a point,” were Torrance’s exact words.

Price was squaring off against Phil Mickelson. Few gave him a chance.

Four hours later, playing in the second last singles, the Welshman honoured his captain’s request with a stunning victory. Everyone, certainly those of Irish descent, remembers Paul McGinley’s 12-foot putt on the home green against Jim Furyk that propelled Europe to the 14½ points required to win back the Ryder Cup.

The Dubliner celebrated by plunging into the greenside lake thereby commandeering both the headlines and the pictorial focus. McGinley’s putt was the moment of victory but the essence belonged to more than one man. What Price did was remarkable and Torrance, as he had done all week, was pitch perfect when he declared in the aftermath: “And out of the shadows come heroes; that’s (from) where Phillip Price and Paul McGinley came.”

A golfer who holes or misses a putt to win or lose a Ryder Cup cannot escape the spotlight but winning the Ryder Cup is a more nuanced process, where the term ‘swing matches,’ is bestowed in hindsight.

McGinley’s putt won the 2002 Ryder Cup but Price’s performance, against the odds, was a massive facilitator in that victory.

In the 1983 staging of the biennial Trans-Atlantic showdown Tom Watson, then a player and this week the non-playing captain of the American team, beat Bernard Gallacher at Palm Beach Garden but it was Watson’s team-mate Lanny Wadkins that is credited with securing the half point by winning the 18th against Spain’s Jose Maria Canizares to halve his match. It was Tony Jacklin’s first time as non-playing captain and the only occasion his team didn’t win or retain the trophy.

Faldo, a six-time Major winner, offered an interesting insight as to his emotions while watching Strange implode.

“It (the 18th) was the best scrambling par I ever made. Everything was churning inside me as I came down the stretch and when I stood over that wedge shot I had to fight to keep my legs still.

“I knew how important it was and I was questioning myself: ‘Can I still do it?’ It is what you are supposed to do, go on to automatic and soak up the pressure. But when things haven’t been going so well you find yourself asking: “Will it ever happen for me again?” Well, it did and I’m so grateful I had the chance to contribute to the team.

Discerning ‘swing matches’ is by nature somewhat arbitrary: parsed over a three-day contest, with 28 matches from which to choose. Few would quibble with that moniker when Germany’s Bernhard Langer and Hale Irwin met in the 1991 Ryder Cup at Kiawah Island (which was ultimately dubbed, ‘The War on the Shore) except perhaps the German golfer.

Langer stood over a six-foot putt on the home green, knowing that if he holed it, he’d win his match and secure the point that Europe needed to tie and therefore retain the trophy. He missed. It was a crushing disappointment for one of Europe’s most decorated Ryder Cup players. He’s long made peace with the moment.

“Everybody remembers the six-foot putt I missed on the last, and rightly so,” he says. “But I was also two down with four to go. I had to make three putts on 15, 16 and 17 to even get into that position to have a chance to win.

“If I’d missed any of those earlier putts, I wouldn’t even have played 18. There’s a lot more to it. Every point, every half-point, counts equally, whether it’s in the morning or the afternoon. My caddie Peter Coleman and I, we read the putt together. We both agreed it was breaking left to right and that I was going to putt it left edge.

“I said: ‘What about those two spike marks?’ ‘I see them too,’ he said. ‘They’re pretty bad. They’re pretty high.’ It was a sunny, windy afternoon. The greens were crusty and firm. If you hit one of those, the ball could go anywhere. So we decided not to go at the spike mark and take a different line. Putt the ball straight and firm, and hope it wouldn’t break. But it did break.

“I was obviously disappointed. I could have been the hero of that Ryder Cup, and now I was the guy who missed that putt. Seve (Ballesteros) came over and gave me a hug. Eventually he started crying, and that set me off. I just felt bad for my team, that’s all.”