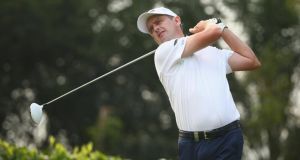 Peter Lawrie is tied for fourth spot in the Malaysian Open after he carded a faultless second round 66 in Kuala Lumpur. (Photograph: Ian Walton/Getty Images)

Peter Lawrie soared up the leaderboard in the Malaysian Open after he carded a six under par second round of 66 to leave him on seven under par overall and tied for fourth place.

Lawrie, who opened yesterday with a steady 71, was faultless second time out with three birdies each on his front and back nines, including a three-in-a-row on the second, third and fourth.

Lawrie has been relying on sponsors invitations to enter tournaments after losing his European Tour Card at the end of last season, and he was delighted with his performance in Kuala Lumpur.

He said: “It’s been a long time coming, I have to admit. I’ve been in the doldrums for the last 20 months — since the Irish Open in 2013. It’s been long wait so hopefully I can keep it going.

“It’s been difficult and I’ve gone through a lot of swing changes but the confidence is coming back and I can see the ball going in the hole again so it bodes well hopefully for the rest of the year.”

Graeme McDowell, tied for the lead overnight, struggled in his second round making three bogeys and a double-bogey as he carded a very scratchy round of 73.

McDowell started poorly with a bogey five on his opening hole, but three birdies and another bogey saw him reach the turn at one under for the day and seven under for the championship.

However, a bogey and double-bogey on 11 and 12 saw him slip down the leaderboard and he sits in eighth spot. Winning Ryder Cup captain Paul McGinley also failed to lived up to his first round performance, shooting a four over par 76 to slip to one over for the tournament.

Lee Westwood and Alejandro Canizares share the lead on 11 under par at the halfway stage. Westwood, the defending champion, started the day level with McDowell on six under and registered his first birdie on the fourth.

A bogey on the par-five fifth set him back, but he birdied seven before playing an impressive back nine where he registered four under-par scores. The Englishman played a neat bunker shot at the 10th, before holing a 12-footer at the 13th and a solid approach saw him able to hole from six feet at the 16th.

Westwood went three clear of the rest after a 20-foot putt for birdie at the last, but Spaniard Canizares was closing in. Starting the day in sixth, Canizares birdied one, five and eight on the front nine, before scoring four more on the back, including a 20-footer at 15 in a blemish-free round.

Westwood had an impressive opening three rounds in the Gulf last week before a level-par 72 on Sunday in Dubai ruled him out of challenging winner Rory McIlroy.

“I played nicely again,” Westwood said afterwards. “It was pretty solid again and I probably only hit one poor shot all day, from the middle of the fairway on the fifth hole — I was going in with a five iron and blocked it right into the water.

“Other than that it was very good and I felt very comfortable out there; I hit a lot of fairways and some good iron shots and made some nice putts. It was great to birdie two of the last three and go from one in front to three in front.”

Canizares won his first European Tour title in eight years in Morocco last year, and finished 12th in Abu Dhabi and eighth in Qatar this year. “It was a lot of fun and I played really well,” said the 32-year-old.

“I wasn’t so good off the tee today, but I putted really well. I made some great up-and-downs when I missed a shot, and I’m very happy overall. I can’t wait for the weekend — it will be a lot of fun.

“It’s a great position to be in and I couldn’t ask for any better; hopefully I can keep it going.”

It was a day to forget for Tommy Fleetwood, who started the day in third, but a nightmare score of seven over saw him finish the day back in 64th and two over par, just above the cut line.