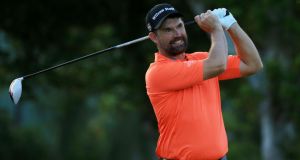 Padraig Harrington of Ireland plays his shot from the first tee during the first round of the Sony Open In Hawaii at Waialae Country Club. Photograph: Tom Pennington/Getty Images

Former world number one and 2005 champion Singh rolled back the years as he charged into a share of the first-round lead with a sizzling seven-under-par 63 in the opening round of the Sony Open in Honolulu, Hawaii on Thursday.

Seeking to become the oldest winner in PGA Tour history, the 52-year-old Fijian racked up seven birdies with his cross-handed putting style on the tight, palm tree-lined layout at Waialae Country Club.

He finished the day in a five-way tie along with Americans Ricky Barnes, Morgan Hoffmann, Kevin Kisner and Brandt Snedeker.

Ireland’s Padraig Harrington is down in 20th after a score of 66, hitting five birdies marred by a bogey on the first, while Graeme McDowell hit three birdies and three bogeys to leave him on 70 for the round.

Singh, who turns 53 next month, narrowly missed a nine-foot putt for eagle on his final hole, the par-five ninth, as he ended a bogey-free display with consecutive birdies in relatively benign morning conditions.

“I was feeling good about my body, my swing, my mind, so I just went out there -- it was early -- started off well and just kept it going,” Singh told Golf Channel after making his 19th career start at the event.

“I scrambled very well. Early on, I didn’t hit too many fairways but I got it around the greens, chipped in once and my putter was working really well.”

If he wins on Sunday, Singh would become the oldest winner in PGA Tour history, esclipsing the record held by Sam Snead, who won the 1965 Greater Greensboro Open at the age of 52 years, 10 months and eight days.

Singh, a 34-times winner on the PGA Tour, has not triumphed since 2008, and in recent years battled assorted health problems which impacted his trademark loose-limbed swing, but he still believes he is capable of winning at the game’s highest level.

“I just want to play,” he replied when asked what kept motivating him as one of the PGA Tour veterans. “I feel like I can come out and win any tournament if I play well. It’s been the same way for the last five, six years.

“I just haven’t produced the scores that I want to produce, but I’m always optimistic about my next day, my next round, my next tournament. Same this year,” added Singh, who has long been renowned for his workaholic approach to practice.

Among the leaders, Kisner and Snedeker played in the afternoon.

“I’ve always struggled at this course,” said Kisner, who credited his improvement to having had a chance to shake off the rust at last week’s Tournament of Champions on nearby Maui.

Reigning champion Jimmy Walker, who is bidding for an unprecedented third victory in a row at Waialae, carded a 69.