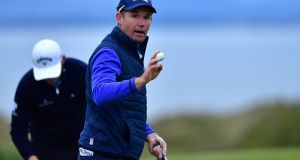 Pádraig Harrington opened with a 66 in the Scottish Championship. Photograph: Mark Runnacles/Getty

Adrian Otaegui made an early statement of intent at the Scottish Championship, defying the chilly, autumnal conditions at Fairmont St Andrews to claim a three-shot lead after the opening round.

The Spaniard carded a blemish-free 62, knocking in 10 birdies to leave the chasing pack in his wake. England’s Matt Wallace and South Africa’s Bryce Easton are tied for second.

Pádraig Harrington was comfortably the pick of the five Irish players in the field, as he made seven birdies and dropped just a single stroke en-route to an opening round of 66, which left him sitting pretty on six under par.

Three-time Major winner Harrington flew out of the blocks on Thursday, and reached the turn four under par after starting on the 10th. His momentum was checked slightly by a sole bogey on the third - his 12th - but birdies on six and nine saw him finish in style.

He sits four shots behind Otaegui and is primed to make a challenge over the coming days.

Elsewhere Jonathan Caldwell also made a solid start at St Andrews with a first round of 70 which leaves him on two under par.

Further down the leaderboard Gavin Moynihan’s level par 72 leaves him with every chance of making it into the weekend, with the projected cut mark currently at one over. Cormac Sharvin (74) and Niall Kearney (75) both have plenty of work to do.

The 27-year-old started with three successive birdies at the first, second and third on his way to reaching the turn in 32.

A further six birdies on the back nine ensured a memorable day for the world number 248, who added: “I felt like a good round could come.

“I didn’t know how good but the last two weeks, even if the results were not very good, I was playing very well from tee to green and feeling good. But the putting wasn’t there. But the putter was hot today, that was the main difference.”

Harrington and English trio Chris Paisley, Aaron Rai and Garrick Porteous each carded six-under 66s, with compatriot Lee Westwood among a cluster of players a shot further back.

The former world number one said: “This golf course is set up for tourists I suppose and there’s quite a lot of room. You’re not going to see better greens all year, they’re absolutely immaculate.

“I think they’re some of the best links greens I’ve ever seen. You can give yourself a lot of chances.

“The par fives, most of them are reachable, and there’s a couple of reachable par fours where you can get close so yeah, it’s scoreable.”