Major titles now the mark of success for Rory McIlroy 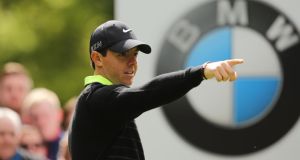 Rory McIlroy returns to Wentworth this week for the PGA Championship, a tournament which kickstarted a magic year for the world number one in 2014. Photograph: Reuters

World number one Rory McIlroy admitted success is now measured in terms of major titles as he looks to defend the BMW PGA Championship title which kick-started his brilliant run of form.

McIlroy was ranked 10th before his stunning victory at Wentworth 12 months ago, which came just days after he called off his wedding to tennis star Caroline Wozniacki, even though the invitations had just been sent.

The 26-year-old had also missed the cut in his two previous appearances in the European Tour’s flagship event, but overturned a seven-shot deficit in the final round with a closing 66.

McIlroy went on to win his third and fourth major titles in the Open Championship and US PGA, with a first WGC title in between, and has carried on where he left off in 2015 with three victories so far.

“I’ve got off to a good start, three wins already this season,” the world number one said. “(But) I would be disappointed if I wasn’t to win one of the next three majors. I think that’s really what determines a good or a great season for me these days.”

McIlroy will play one more event, next week’s Irish Open at Royal County Down where his foundation is acting as tournament host, before the US Open at Chambers Bay in June, but insists he is concentrating on the task at hand.

“My mind is focused on the next two weeks here and at the Irish Open,” he added. “I just want to try and finish off this stretch of golf as well as I can, and I get a couple weeks off after that. Then I’ll start to think about the US Open and get ready for that.

“I’ll probably go and take a look at Chambers Bay a little bit ahead of time. But now just fully focused on these two weeks and try to play as well as I can here, and then I’ll put the clubs away for a few days and then I’ll turn my attention to the US Open.”

Manchester United fan McIlroy played the pre-tournament pro-am with former Red Devils players Phil Neville and Paul Scholes, as well as One Direction’s Niall Horan, who caddied for him in the par-three contest before this year’s Masters.

“It was really good fun,” McIlroy said. “The boys were very nervous. I find that quite unusual but I guess if I had to go out and sing in front of a lot of people or play football in front of 70,000 at Old Trafford I would be a bit nervous as well.

“We chatted a little bit about football, a little about golf, a little about other things. It was really good fun. It’s always good to play with guys like that, that have a real interest in the game as well.”