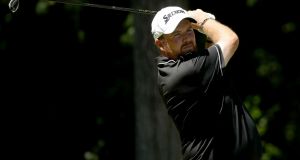 Shane Lowry hits his tee shot on the second hole during the final round of the Wyndham Championship at Sedgefield Country Club in Greensboro, North Carolina. Photograph: Streeter Lecka/Getty Images

It can be a game of fine margins, as Shane Lowry discovered in his ultimately vain quest to break into the megabucks FedEx Cup playoff series on the PGA Tour.

The 30-year-old Offalyman carded a final round 67 for a total of 15-under-par 265 and a share of seventh place in the Wyndham Championship in Greensboro, North Carolina, which gave him his best finish of the year on the US circuit but still saw him fail narrowly in his bid to make the top-125 on the FedEx Cup standings that progress to the playoffs.

Lowry – who had entered the week 145th in the standings – did leapfrog over a number of players, but just not enough as he finished the regular season in 127th, two spots too many. It meant that he failed to advance to the Northern Trust tournament in New York, the first of the playoff events, where defending champion Rory McIlroy will be the sole Irish player competing.

Lowry intends to take a couple of weeks break at home in Dublin and target the European Tour for the rest of the season.

Sweden’s Henrik Stenson clinched a one-stroke win in North Carolina for his first victory since the British Open last year.

The Swede reeled off three consecutive birdies from the 15th hole to take the lead before making a par at the last, sinking his winning putt from inside three feet to edge young American Ollie Schniederjans.

Stenson carded 64 to finish at 22 under par for his sixth US PGA Tour victory.

Schniederjans also shot 64 for 21 under, while another American, Webb Simpson, finished four shots back in third place.

Davis Love III, at 53 seeking to become the oldest winner in tour history, finished eight shots adrift in a tie for 10th.