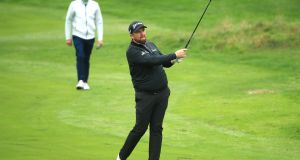 Shane Lowry will be in action at the Houston Open this week as he builds up to the Masters at Augusta next week. Photograph: Andrew Redington/Getty Images

The trick for players is to work out what suits best in terms of preparation for next week’s US Masters. Whether to play this week’s Houston Open, or not. In the case of Shane Lowry and Graeme McDowell – and, among others, Dustin Johnson and Adam Scott, two who return to duty after positive Covid-19 results – the option is to play with a card in hand; while, for Rory McIlroy and among others Tiger Woods, the approach is a different one, to use the time prepping in their own way away from competition.

The course set-up for the Houston Open at Memorial Park Golf Course, a historic venue dating back to 1936 and located in the heart of the city, has been toned to ensure those playing in Texas will get to sharpen parts of their games ahead of the Masters, while chasing a title worth winning in its own right.

Memorial Park has been totally renovated in recent years, part of a €30 milliion-plus project, with the golf course architect Tom Doaks in consultation with Brooks Koepka producing a layout in downtown Houston that makes it stand out. The greens are set to play at 12.5 on the stimpmeter to help players get up to speed ahead of Augusta National’s late-year examination.

For Lowry and McDowell, it will provide a final preparation ahead of the Masters, originally meant to be the first Major of the year but rescheduled so that it is the last of three played in 2020. Each of the first two have produced first time Major champions, Collin Morrikawa at the US PGA and Bryson DeChambeau at the US Open.

Lowry – his custodianship of the Claret Jug extended by 12 months since the British Open at Sandwich was postponed for a year – last played in the CJ Cup in Las Vegas three weeks ago and, after a visit back home, returned last week to the United States to finalise his preparations for the Masters.

Lowry is joined in Houston by McDowell, who hasn’t played since the BMW PGA Championship at Wentworth early last month. He has slipped to 65th in the latest world rankings but retained his place in the Masters field, as he was inside the exempt top-50 when the cut-off was made back in the spring and the tournament was rescheduled due to the impact of Covid-19.

Pádraig Harrington is also playing in Houston, although it will be the Dubliner’s last outing of the year on the PGA Tour as he isn’t qualified for the Masters. Harrington showed decent form to get into the mix at the Bermuda Championship last week only for some poor wedge play and a cool putter to stall his charge on the back nine of his final round on Sunday.

What will be different this week in Houston is that a limited number of spectators – 2,500 per day – will be allowed access to the course. Since the PGA Tour’s rebooting, tournaments have been played behind-closed-doors and that policy is also being adhered to by Augusta National for the Masters.

While Lowry and McDowell factored Houston into their build-up, McIlroy, who has dropped to world number five, opted for a different approach and has worked at home in Florida and incorporated a couple of practice rounds at Augusta into his preparations.

The USGA has confirmed 10 additional players, including former world number one Stacy Lewis, as exempt into the US Women’s Open which takes place at Champions Golf Club in Houston on December 10th-13th. The top 10 money leaders, not previously exempt into the championship, have been added to make up a 156-player field for the championship which is composed entirely of exempt players.