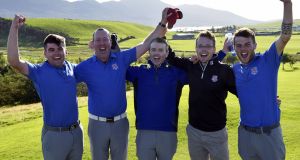 Limerick remained on course for a famous double when they ended their 43-year wait for AIG Barton Shield glory with a resounding seven-hole victory over Sligo at windy Westport.

The elite foursomes event was billed as a clash of the giants between Warrenpoint’s Colm Campbell and his international teammate Caolan Rafferty, the Walker Cup star from Dundalk.

But Limerick put paid to the “dream” final and Warrenpoint’s bid for their third Barton Shield win in four years and their eighth overall with a two-hole semi-final win as the men from Rosses Point completed a seven-hole demolition of Dundalk, who were hoping to go one better than last year’s All-Ireland final defeat to Athenry.

The Munster champions have great strength in depth as they seek to emulate their famous double success of 1976 when they won the Barton Shield and the Senior Cup at Tramore.

It was a gamble to drop 39-year-old former South of Ireland champion Justin Kehoe for the final, fearing the precise Offaly man might struggle for distance in southeast winds that were gusting at well over 30mph on Clew Bay.

However, the change paid off for Limerick captain Juan Fitzgerald, who brought in Sean Enwright for the Birr native who had partnered Owen O’Brien to a gutsy one-hole win over Campbell and Ryan Gribben in the morning.

Kehoe still claimed his second Barton Shield winner’s medal, 18 years after winning with UCD, as Enwright and O’Brien claimed a two-hole win over brothers TJ and Daniel Ford – O’Brien’s 25-footer at the 15th falling on its last revolution to seal overall victory.

The real damage was inflicted by Michael Reddan and Ciaran Vaughan, who proved as immovable as Croagh Patrick by completing a remarkable unbeaten run through the competition with a five-holes win over Ruairi O’Connor and Thomas Finnegan.

Hard thing to do

“It’s been a fantastic journey for us in the Barton Shield,” skipper Fitzgerald said. “We made a decision to change the team in the afternoon, which is a hard thing to do.

“Justin [Kehoe] played really well this morning, but we just felt the golf course is so long and the wind is so strong that we probably needed someone like Sean Enright to come in and boost the side in the afternoon.

“We’ve been unlucky in a few Irish finals. Sligo beat us back in 2006 at Enniscrone, so we kind of owed them one really. It was a very sporting game. I have great friends in Sligo Golf Club, I hope I still have them after today.”

In the AIG Jimmy Bruen Shield, The Island beat Nenagh 3½-1½ and now face Armagh club Tandragee, who were 3½-1½ winners over Roscommon, for the title on Saturday.

The Dublin club looked set to clinch the crucial third point when the Hurley brothers Conor and Cillian went four up with four to play against Brian Freeman and Matthew O’Gara Jnr. While the Nenagh pair won the last four holes to send the match up the 19th, Conor Hurley made his eight-footer to win the match with a peerless birdie three.

“The Hurley brothers won it for us, and it is so apt because I am a hurling man!” Kelleher said with a grin. “To win it with a birdie on 19 was just incredible.

“It is 14 years since The Island last won a pennant – the Jimmy Bruen in 2005 in Rosslare. The team is brand new with the exception of Paul Cullen, who played in the first match today. We have a lot of inexperienced, young guys, so we are thrilled.”

Tandragee have never won a green pennant, and the Co Armagh club was delighted to beat Roscommon and make another All-Ireland final.

“We last got to the All-Ireland finals in 2013 at Royal Tara, but we have never won an All-Ireland,” said captain Brian Fyffe. “I am so proud of the boys.”

1 Rory McIlroy steadies the ship after shaky start at US PGA
2 Alexis Sánchez joins Inter to save Man United €46.5m in wages
3 Andy Farrell raring to rekindle Ireland’s Six Nations title tilt
4 Harding Park, named after a lousy US president who never stepped foot on it
5 On healing and wild hurling: The re-education of Diarmuid Lyng
Real news has value SUBSCRIBE