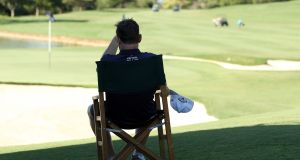 Branden Grace takes a moment in the shade during the third round of the Alfred Dunhill Championship at Leopard Creek. Photograph: Jan Kruger/Getty Images

Pablo Larrazabal will take a three-shot lead into the final round of the Alfred Dunhill Championship at Leopard Creek Country Club after carding a solid 70 in hot and breezy conditions on Saturday.

The Spaniard, seeking his fifth victory on the European Tour, and first since 2015, offset three bogeys with five birdies to maintain his overnight advantage as the chasing pack battled to make up ground.

Larrazabal’s 11 under-par total puts him three ahead of Dutch player Wil Besseling (70) while South African Branden Grace (71) is a further shot back. Co Down’s Jonathan Caldwell has slipped back to a share of 26th place following a round of 74.

This year’s Alfred Dunhill Championship has made history by being the first-ever European Tour event to allow players to wear shorts due to the extreme heat in South Africa’s Mpumalanga province, yet Larrazabal has been one of the few who has chosen to stay in long trousers.

1 No further players to be called up to Ireland squad to face Georgia
2 Gerry Thornley: Ireland don’t want to box themselves into a corner
3 Kevin McStay: Maybe a knockout All-Ireland Championship is the long-term solution?
4 Former France and Stade Francais winger Dominici has died aged 48
5 New Killarney athletic track another jewel in the Kingdom’s crown
Real news has value SUBSCRIBE