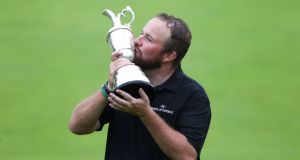 Shane Lowry will now defend his British Open crown in 2021, after the 2020 even was cancelled. Photograph: Matt Mackey/Presseye/Inpho

The R&A has taken the unprecedented non-wartime step of cancelling this year’s Open Championship. The 149th edition of golf oldest major, due to be held at Royal St George’s in Kent from July 16th, will instead take place at the same venue, near Sandwich, in 2021. This will mark the first time since 1945 there has been no Open in a calendar year.

“It has been necessary to cancel the championship based on guidance from the UK Government, the health authorities, public services and the R&A’s advisers,” read a statement.

Speculation has surrounded the Open for weeks, with the world in the grip of the coronavirus crisis. The Masters and US PGA Championship have already been postponed, with those majors retaining hopes of playing later in 2020. Further news on that is thought to be imminent. The R&A has, instead, followed the lead of Wimbledon by writing this year off entirely. Earlier suggestions were that the R&A and the United States Golf Association – which oversees the US Open – were competing for a September date before the Ryder Cup.

“I can assure everyone that we have explored every option for playing the Open this year but it is not going to be possible,” said Martin Slumbers, the R&A’s chief executive. “There are many different considerations that go into organising a major sporting event of this scale. We rely on the support of the emergency services, local authorities and a range of other organisations to stage the championship and it would be unreasonable to place any additional demands on them when they have far more urgent priorities to deal with.”

With financial considerations also understandably key in the R&A’s decision making, it is believed the Open is covered by a similar – if not identical – insurance policy to Wimbledon whereby this cancellation will see any losses reduced to a bare minimum. The Open has lucrative broadcasting deals, including with Sky Sports and around 200,000 spectators were due at Royal St George’s in little over three months’ time.

“The R&A will transfer over 2020 purchased tickets and hospitality packages to the Open in 2021,” added the statement. “Purchasers who no longer wish to (or are no longer able to) attend in 2021 will receive a full refund. Further information on this process will be sent directly to ticket and hospitality purchasers in due course.”

The R&A has also confirmed the 150th Open will be played as intended at St Andrews, now in 2022. - Guardian