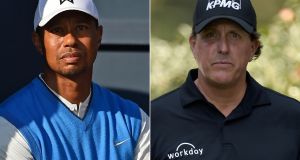 Quelle surprise! United States captain Jim Furyk didn’t throw any curveball into the equation when he revealed three of his four wild card picks for their defence of the Ryder Cup against Europe in Paris later this month, naming Bryson DeChambeau, Phil Mickelson and Tiger Woods as his choices.

A fourth and final name will be added to the USA team following this week’s BMW Championship in Philadelphia, with Tony Finau considered the one most likely to be the one to complete the team.

In truth, Furyk’s three choices were widely expected with Woods making a remarkable comeback following back surgery, while Mickelson is set to become the most capped Ryder Cupper of all time. DeChambeau’s form of late has made him the hottest player on the planet.

Furyk admitted that DeChambeau’s form - rather than any extra urging from Woods, who will vacate his vice-captaincy role to concentrate fully on playing - had “made it easy” for him to select the 24-year-old who has won the opening two tournaments of the season-ending FedEx Cup Series, the Northern Trust and the Dell Technologies Championship.

DeChambeau’s selection, given his recent form, was widely anticipated and his bond with Woods is likely to see the pair play together in foursomes and fourballs. “I think that we roll off of each other well. And what I mean by that is we spur each other on with great shots. we could be a great team out there, working hard and getting our job done and maybe pushing the pedal to the metal and, I don’t really want to say it, but I think maybe we can potentially intimidate a couple of people out there,” he said of a possible partnership with Woods.

It will be DeChambeau’s first appearance in the Ryder Cup, although he did attend Hazletine two years ago as a spectator to experience the atmosphere. “I wanted to be a part of that atmosphere and get comfortable with that,” explained DeChambeau.

Woods’s return to the Ryder Cup as a player affirms his return to health. “It is a feather in our cap to have him playing on our side,” said Furyk.

“I made my first team at Valderrama it was quite an honour, it made me understand how important the Ryder Cup is and from that point on I always wanted to be part of the team,” said Woods, who last played in 2012. He described his return as “beyond special.”

“I want to allow him to be able to practice and work and prepare with his partners. Things won’t change much but he will be a player,” said Furyk of his decision to relieve Woods of the vice-captaincy role. Furyk also announced that David Duval, Zach Johnson and Matt Kuchar would join Davis Love III and Steve Stricker as vice-captains.

Woods will be playing in his eighth career Ryder Cup and his first since 2012. His 33 Ryder Cup matches played rank fifth all-time among Americans and his 4-1-2 career mark in singles includes an undefeated 2-0-1 mark on foreign soil

“At the beginning of the year that was one of my goals, to make this team. I got the call from Jim to be vice-captain but deep down I wanted to make this team (as a player) and as the year progressed it was something I was able to (do) and, lo and behold, I am part of this team. It is incredible to look back to the start of the year and, to make the team, is beyond special,” said Woods.

Furyk will complete his team next Monday, with Finau considered the favourite to get the last pick. However, Xander Schauffle and Kevin Kisner are also very much in the frame and Furyk will only make his decision following the BMW with current form the main criteria for him.

1 Gordon D’Arcy: If Farrell can tap into our self-worth, we’re all on a winner
2 Winds of change as Ireland name a refreshed team, picked on form
3 Who is Caelan Doris? Meet Ireland’s newest rugby star
4 Nike Vaporflys won’t be banned but regulations will tighten
5 Ashleigh Barty now living up to all her earlier promise
Real news has value SUBSCRIBE