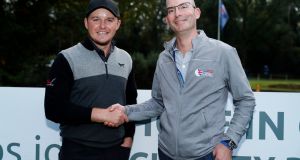 Eddie Pepperell poses for a photo after his hole-in-one during the opening round of the British Masters. Photograph: Luke Walker/Getty Images

A spectacular hole-in-one helped Eddie Pepperell claim a share of the lead with Ryder Cup star Tommy Fleetwood and Matt Wallace after the opening round of the British Masters.

While tournament host Justin Rose struggled to an opening 74 at Walton Heath, his fellow Englishmen overcame difficult windy conditions to end the day on top of the leaderboard on five under par.

Defending champion Paul Dunne, whose group were put on the clock for slow play at the turn, finished best placed of the three Irish players in the field after finishing on two under par. The Greystones golfer turned in an blemish free card but only had birdies on the seventh and 11th to show for his efforts.

Padraig Harrington and Shane Lowry also found birdies hard to come by on the Walton Heath layout, Harrington managing just one in his round of 73 while the same was the case for Lowry who finished three over par.

The first hole-in-one of Pepperell’s European Tour career came in remarkable fashion, his five-iron from 172 yards on the ninth seeming to hit the bottom of the flag, bounce high in the air and away from the hole before spinning back into the cup.

Pepperell was not done there and a birdie on the 10th and eagle on the 11th meant he had covered a three-hole stretch in five under par before bogeys on the 13th and 15th were followed by a closing birdie.

“It was a bizarre shot from where I was standing,” Pepperell said. “It looked like it pitched in the hole, jumped up and looked like it was going long because of the height it came out and obviously went in.

“I played awful in the pro-am on Wednesday, probably the worst I have in a while and I wouldn’t say I played great today but had that really hot run and it’s great to be at the top with Matt and Tommy.”

Fleetwood’s own round was not without incident, with his only bogey of the day coming after an errant tee shot on the par-three 17th finished in a cup holder in a buggy which had been parked to the left of the green.

“I’m still not sure how it got there,” said Fleetwood, who outscored playing partner, Ryder Cup team-mate and Race to Dubai rival Francesco Molinari by six shots.

“Luckily it didn’t go in the beer in the other cup holder because it would have ruined a drink and the golf ball. It wasn’t a great shot, but bogey was fine. It’s not something you get too angry about around here today.

“I do have quite a good mindset at the moment. I’m by no means the freshest I’ve ever been but it’s a case of trying to be easy on yourself.”

Wallace had set the clubhouse target earlier in the day as he seeks a fifth win in his 50th European Tour start and fourth victory of a season which saw him narrowly miss out on a Ryder Cup wild card.

“I was disappointed to not be there but I saw Thomas (Bjorn, European captain) on Tuesday this week and he said probably one of the nicest things someone has ever said to me as a golfer.

“I won’t say what that is because it’s between me and him, but I’m going to use that and I’m the type of character that’s going to use this disappointment as fire to go and make the next one and play better and get better as a golfer and a human being.”

Wallace headed straight to the driving range after Europe’s victory at Le Golf National was confirmed and his social media post saying “2020 starts now” did not go unnoticed by Bjorn.

“That shows a lot about his character and the way he’s been through it all has been great,” Bjorn said after a 73. “I just said to him I’ll always be there for him, but I was there for him before.

“I had a vision of what this team should be and unfortunately at that moment in time Matt wasn’t in it, but he was very, very close. But that doesn’t make Matt a worse golfer or anything. I just love his attitude towards how he goes forward and he’ll be there in the future.”