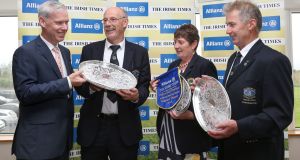 It’s not just a marketing catch line, as those esteemed officers who competed in the Allianz Irish Times Officers’ Challenge at Galway Bay discovered.

With a wind that made it difficult to stand let alone swing a club and rain that tested the fabric of the very best wet gear on the market, let’s just say that it was an extremely difficult test on a stretch of coastline that is an integral part of the Wild Atlantic Way.

This wasn’t a day to stop and smell the roses or to appreciate the scenery, as the consistently heavy rain made for an endurance test that ultimately saw the brave folk from Ballinrobe Golf Club make a winning raid with a team score of 66 points – best two on each hole counting – that at least ensured the Newbridge silverware prize was something hard-earned.

“I do a bit of farming and I’ve been praying for rain for three months . . . just not on the day of this competition,” said Mike Burke, the men’s captain of Ballinrobe, who combined with club president Tom Conlisk and lady captain Phyllis Lee to produce the winning score that saw them finish three points clear of runners-up Galway Bay, with Gort a further two points behind in third.

In what was the final qualifier – with the journey starting out in Portmarnock Links back in April, before taking in Cork, Malone and Mount Juliet – for the national final which will be held on the Palmer Ryder Cup course at The K Club next month, Ballinrobe’s perseverance reaped dividends . . . helped in a little way late-on when Conlisk produced a hip flask.

“Let’s just say it wasn’t Coca-Cola or 7Up,” recalled Burke of the beverage that brought respite from the wild weather.

“I’ve been playing golf for a long time and it was the wettest I’ve ever had to play in. The only positive thing about it was that it wasn’t cold. I’d a new pair of golf shoes on me and I can say that one managed to keep the water out and the other didn’t. I need a new pair of FootJoys,” said Burke.

The course at Galway Bay – designed by the late Christy O’Connor Junior – stood up superbly to the weather conditions but, with the wind and rain whipping in from the Atlantic, it made for a demanding round with a number of teams failing to finish, while those who did handed in rain-soaked cards.

“I have to say, fair play to our lady captain Phyllis, because she kept us going when it might have seemed easier to give up. But we thought we are going okay in the conditions. We’ve a saying here in the West, ‘let’s stick’ – and that’s what we said to keep ourselves going,” said Burke.

One of the most picturesque par threes on the course – or, indeed, anywhere - is the seventh hole. Normally, you’re looking out on to the Atlantic but, with the rain and mist on the day, the task at hand demanded to simply focus on paying the tee shot over water to the green.

“It would usually be a seven-iron but Tom and myself both hit four-irons [into the wind],” said Burke. As it happened, he missed the green left but played a recovery shot from the rough to 20 feet below the pin and, lo and behold, sank the par putt.

Ballinrobe were joined as qualifiers by Galway Bay, who used their local knowledge of the elements as much as the course to great effect, while Gort – who were outright winners of last year’s competition – finished third to again book a road trip to The K Club. Given the conditions, all three clubs richly deserved to advance to the national finals.

Davy Russell ponders what might have been for Tiger Roll 18:07
Cycling Ireland thrilled with take-up for Zwift League series 17:02
Racetrack organisation does not envisage any closures in the short-term 15:03
Coronavirus crisis could cost the GAA up to €60 million 14:19
Eddie Hearn: Tyson Fury is Anthony Joshua’s opponent of choice 12:55
Here is your handy guide to sport on television this week