Only two players manage rounds of level par 72 on day average score was 79.8 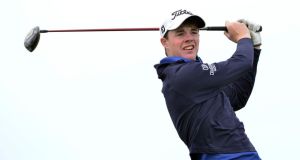 Stuart Grehan: “The key here is to hit the fairways.” Photograph: Pat Cashman

and lead the qualifiers in the AIG Irish Amateur Close Championship at a testing Seapoint.

The Termonfeckin links showed its teeth on the second day as just two players in the 140-strong field – Forrest Little’s Eoin Arthurs and Cork’s John Hickey – managed rounds of level par 72 on a day when the average score was 79.8.

No one could dip into the round for 36 holes with 21-year-old Grehan adding a 74 to his opening 71 to lead the qualifiers on one-over-par 145 from Knock’s Colin Fairweather by virtue of his better second-round score.

Many of Seapoint’s fairways are generous but the field paid a high price for inaccuracy at holes such as the 10th, 11th and 13th. And big numbers were commonplace.

East of Ireland champion Colm Campbell from Warrenpoint came to the downwind, par-five 18th needing a par to win the silver medal awarded to the leading qualifier.

But he drove left near a tree, put his second in a bunker, chipped out and then went through the back to take a double bogey seven for a 78 that left him in a five-way tie for third on two over 146 with Co Louth’s Brian Ronan (73), Carton House’s Gary McDermott (74), Balmoral’s Matthew McClean (76).

‘Tough day’ “The ball just didn’t want to go in the hole at the last,” said Campbell

ruefully. “It was a tough day and I wasn’t feeling 100 per cent but I still should have been able to shoot a better score than that.

“I got off to a bad start and made five bogeys in seven holes with three three-putts but while it would have been nice to lead the qualifiers, you can’t win it today.

“Winning the East is only starting to sink in now and I know these championships aren’t easy to win. But it was nice to get one under the belt so my intention this week is to win again so let’s see how it goes.”

Grehan, who won the Irish Amateur Youths title in 2012 and was joint second last year, is also targeting a championship victory that would propel him into the frame for an Ireland cap.

He also confessed to having a secret weapon this week – local knowledge in the form of his girlfriend, Irish international Carla Reynolds who plays at Seapoint.

Returned from US “I played quite smart,” said Grehan, who came home after just one year at Eastern Michigan University due to homesickness. “I hit driver only three times in each round. The key here is to hit fairways. No matter how far back you are, you have to hit fairways. That was my game plan and it worked well.

“Local knowledge? Yes a bit. I’ve been up here the last two weeks. I didn’t play well at Baltray last week but I’ve done a lot of practice here for the last few days and it looks like it’s paying off.”

The course, which was designed by Des Smyth and Declan Branigan and opened for play 21 years ago, has certainly met with the approval of the players.

“You don’t need to be off line by much to do yourself some damage. You are hitting three woods and two irons off tees today but you are going to hit driver in matches.”

Castle’s Alex Gleeson was one of those to suffer. He went out in level par on the back nine but came home in 45 for an 81, taking 11 at the par-four fourth and seven at the sixth to miss the cut by just two strokes.