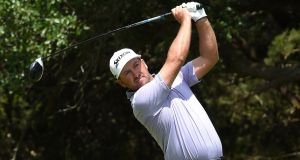 America’s Kevin Chappell finally got to grips with the windy conditions at the Texas Open to claim the outright lead on day three as he chases his first PGA Tour victory.

The 30-year-old, who has six runners-up finishes to his name, was just one shot off the lead after Friday but an outward 38 appeared to have left him struggling.

However, three birdies in his final five holes in a bogey-free back nine lifted him to the top of the leaderboard on eight under after a round of 71.

South Africa’s Branden Grace, a renowned good wind player, shot 70 to move to seven under alongside another American John Huh.

The group one shot further back included Ryan Palmer, who carded an impressive 68 on a testing day on the AT&T Oaks Course in San Antonio, and Scotland’s Martin Laird after a 71.

Overnight joint leaders Tony Finau and Bud Cauley were also in that chasing pack having rallied late on in their rounds after difficult starts.

Meanwhile Graeme McDowell’s hopes of victory disappeared on Saturday as he shot a third round 76 in San Antonio.

Beginning the day on two under par McDowell reached the turn on three under thanks to birdies on the 14th and 18th - his fifth and ninth holes.

However a disastrous back nine saw him slip out of contention - with a double bogey seven on the second seeing him move back to one under.

And things were to get worse, with bogeys on six, seven and nine leaving him on two over par for the tournament and in a share of 50th place.

He is tied with Seamus Power, who shot a 74 on Saturday.