Tiger Woods faces another six months out after further surgery 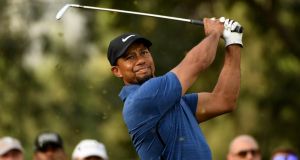 Tiger Woods has confirmed that he has undergone further back surgery. Photograph: Ross Kinnaird/Getty Images

Tiger Woods has announced he has undergone further successful back surgery.

The 41-year-old released a statement on Thursday confirming he had an operation to alleviate “ongoing pain in his back and leg”.

The 14-time Major winner announced on his official website: “The surgery went well, and I’m optimistic this will relieve my back spasms and pain.

“When healed, I look forward to getting back to a normal life, playing with my kids, competing in professional golf and living without the pain I have been battling so long.”

Woods has not played competitively since withdrawing from the Dubai Desert Classic at the start of February due to back spasms.

The former world number one attempted to return in time for the Masters at Augusta National earlier this month, but said his back rehabilitation did not allow him the time to get “tournament ready”.

The statement said the former world number one will now rest for several weeks before beginning therapy and treatment, adding that patients typically return to full activity in around six months.

Doctor Richard Guyer, who performed the operation, said: “After he recovers from surgery, he will gradually begin his rehabilitation until he is completely healed.

“Once that’s accomplished, his workouts will be geared to allowing him to return to competitive golf.”

Meanwhile, Graeme McDowell has been a promising start at the Valero Texas Open in San Antonio to sit two shots off the early clubhouse lead.

The Portrush golfer carded seven birdies and and three bogeys in a four-under 68 that left him in a share of fourth position after the early players had completed their rounds.

A total of 10 players carded 68s, with the American duo of Will MacKenzie and John Huh sharing second place on five under behind early clubhouse leader, South Africa’s Branden Grace, who opened with a 66.

Waterford’s Séamus Power rescued his opening round, fighting back from four over after 11 holes with four birdies in the last seven holes to finish the day on level par.