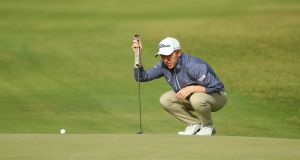 Ireland’s Gavin Moynihan lines up a putt on the sixth green during day one of the Commercial Bank Qatar Masters at Doha GC. Photograph: Warren Little/Getty Images

Ireland’s Gavin Moynihan let a very promising start slip away in the first round of the Qatar Masters on Thursday as he carded a one-under 71 at Doha Golf Club.

The 24-year-old made five birdies on his front nine after an early morning start in blustery conditions, turning in three-under 33. But a third bogey of the day on the par-five 10th hole and double-bogey five at the short 13th saw him hand back all his gains.

Moynihan finished on an up note with a birdie on the last to settle on one under and a share of 38th position.

South Africa’s Justin Walters admitted he was “ecstatic” after an opening 67 gave him a share of the lead after a windswept opening day.

Walters defied the testing conditions to fire five birdies and no bogeys in a flawless round and join Spain’s Adri Arnaus on five under par.

“Warming up today in the wind I thought any score under par would be great, so to shoot five under I’m ecstatic,” Walters said.

“I putted really well and my short game was really good today. I haven’t played that well, even in calmer conditions, in a while so it’s surprising and very welcome.

“I wouldn’t want to play another three days with a wind like this, especially after a relentless spell of wind in Oman last week.

“Hopefully, as the conditions improve over the next few days I can continue to play the way I’ve played today.”

Arnaus, who finished second on the Challenge Tour last year to graduate to the European Tour, and Walters enjoy a one-shot lead over a seven-strong group which includes South Africans Justin Harding and George Coetzee, Scotland’s Richie Ramsay and Welshman Bradley Dredge.

“It was a lot of fun,” Arnaus said after a round containing an eagle, four birdies and a solitary bogey.

“The wind picked up early but I kept the ball in play most of the time. I gave myself good birdie chances and I was able to take advantage of some of them, so I’m pleased.

“It was good getting into contention last year and then at the end being able to close it out at the Challenge Tour Grand Final gave me the belief that I could go on and do it on a bigger stage. Tomorrow is a new day so I’ll just need to continue doing the same things.”

Ramsay started his round with an eagle on the 10th – his opening hole of the day – and reached five under par after 10 holes, only to drop shots on the seventh and eighth before a closing birdie on the ninth.

Oman Open winner Kurt Kitayama, who is seeking a third European Tour victory in his last 10 starts, is part of a 19-strong group on three under par after an opening 69.

Pre-tournament favourite Thomas Pieters is a shot further back alongside his World Cup-winning partner Thomas Detry.

SCORES
(Par 72, British and Irish unless stated. Play suspended with one group on the 18th hole).

Jim McGuinness: There is a way to save championship and make it competitive again 09:00
Has Mike Tyson completed the least likely redemption story in American sport? 09:00
Nicky English: Task for Waterford and Galway made harder by third week syndrome 08:30
Maradooo! A preternaturally gifted artist and a rebel outsider 07:00
Ireland’s clash against Georgia will be an important audition 06:27
Here is your handy guide to sport on television this week