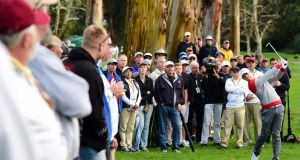 Rory McIlroy takes his second shot on the 12th hole during round one of the Northern Trust Open at Riviera Country Club in Pacific Palisades, California. Photograph: Harry How/Getty Images

Rory McIlroy made the most of an early start to both his year on the US PGA Tour and his first round at the Northern Trust Open as he carded a four-under 67 to sit one shot behind the early clubhouse leaders in California.

More accustomed to getting his US schedule underway under the heat of the Florida sun, the world number three had a sweater on as he teed off just after 7.30am on the 10th hole alongside Japan’s Hideki Matsuyama and American veteran Matt Kuchar.

McIlroy had arrived on the west coast after working on his game at his Florida base during a week off and he enjoyed a hot start on a chilly morning on his debut at the famous Riviera Country Club.

An opening tee shot at the 315-yard short par-four 10th left McIlroy with a tricky pitch from 30 yards, but he would turn it into the first birdie of the day by holing the putt from seven feet.

McIlroy admitted to working on his putting after his spell in the United Arab Emirates and he soon got the measure of the small and tricky Riviera surfaces, almost making an outrageous 73-foot eagle putt on the second before tapping in for a second birdie.

Three on the spin

Riviera’s fairway bunkers usually exact a toll and McIlroy would drop his only shot of the round after finding the steep face of one on the right of the 15th, forcing him to come up short of the green in three as he carded a bogey five.

Two pars followed before a brilliant wedge to nine feet on the par-five 17th set up a third birdie of the round as he turned in two-under 34.

McIlroy made it a clean sweep of the par fives with a birdie on the first before a run of five pars. Another stunning approach, this time to inside three feet on the par-four seventh, brought a fifth birdie.

Unlucky to just miss out on another gain on the eighth, McIlroy holed a tricky short putt for par on the 18th to compete a fine opening round in the event.

Chez Reavie and Luke List both recorded bogey-free five-under 66s to share the lead with Bubba Watson, who carded seven birdies and two bogeys in his round. McIlroy had company on four under from American Ricky Barnes, Charles Howell III and amateur Charlie Danielson.

Charl Schwartzel showed no signs of any jetlag or effects of last week’s victory at the Tshwane Open in his native South Africa as he opened with a three-under 68. He was joined on that mark by the Americans Billy Horschel, Jason Kokrak and Harris English, Argentine veteran Angel Cabrera, South Africa’s Retief Goosen and American-based Scot Martin Laird .

England’s Justin Rose was a shot further back on two under, a mark also shared by McIlroy’s playing partners Matsuyama and Kuchar.

McIlroy was delighted to play well in his first competitive round at Riviera, which is consistently ranked by players as one of the top courses on the PGA Tour.

“Put myself out of position a couple of times but the way the conditions of the golf course were, it didn’t punish you as bad as if it would have been as firm as it was the last couple of days,” he said.

“I felt like my pace on the greens was good . . . and I lag-putted well. All of the things that you need to do around this golf course, I did pretty well today.”