David Feherty confirms death of his son Shey from overdose 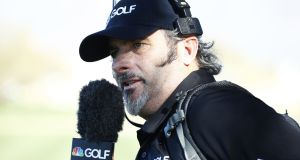 David Feherty has confirmed the death of his son Shey from an oversode. Photograph: Getty Images

The son of David Feherty, the Northern Ireland golfer turned US commentary star, has died from an overdose.

“My first born son is gone from me, dying from an overdose on his 29th birthday. Bless his sweet heart, I will fight on.”

It is understood Shey Feherty died on Saturday. A funeral service was to be held in Dallas, Texas, on Tuesday.

David Feherty, 58, was originally from Bangor in Co Down, but is now based in Dallas.

After a successful playing career, which saw him represent Europe in the Ryder Cup, Feherty went on to forge a career as an on-course commentator and analyst.

Having previously worked for CBS, he now has his own show on NBC’s Golf Channel.

My first born son is gone from me, dying from an overdose on his 29th birthday. Bless his sweet heart, I will fight on.

He has spoken publicly about his own battles with alcohol and drug addiction in the past.

“Our deepest condolences go out to David Feherty and his family on the passing of his oldest son, Shey,” they said.

“Family means everything to David and his Golf Channel, NBC Sports and extended television family send their love and support at this difficult time.”

Hollywood actor Don Cheadle was among those to extend condolences.

“Oh, David. Gutted. No words. Thinking of you and love you, man,” he tweeted.

PGA tour golfer Tony Finau tweeted: “Sad to hear. Thoughts and prayers with you and the family David.”

It also referenced his apparent struggles with addiction.

“His beautiful blue eyes could captivate a room, but they could not stare down the enemy that lurked in the shadows and prevent it from reaching out to grab him in his darkest time,” it read.

“Shey, fought hard to win his battles with drug addiction and mental illness, but in the end the monsters won.

“The worry we felt watching Shey’s struggle with his addiction has now been replaced by a feeling of loss so deep, knowing we will never see his smiling face or beautiful eyes again.

“But through our heartbreak we share Shey’s story in the hope that it will touch another person who may battle with addiction either for themselves or for a loved one. Please know there is no shame in asking for help. Our Shey is gone from us now, but you can help us keep his light shining and focused if you reach out to another who suffers.”