Colin Byrne: Turning pro can be scary, but I have no fear for these players 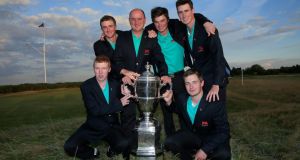 One day you are playing golf for fun and the next you are playing for your living. So how is the transition and what does it mean for three of the Irish members of the victorious Walker Cup team in Lytham last week?

There is no time for lingering in today’s game: the show goes on and you need to move both physically and mentally with it. Having won the most coveted amateur trophy in the western world, it would have been nice for the players to have been able to lap up some of the post-trophy accolades. Instead it was a swift trip north for Gary Hurley to Scotland and stage one of the European Tour School. Gavin Moynihan headed south to Milan for the Italian Open, and Paul Dunne heads further east to Austria next week for his first stage at securing a tour card for the European Tour.

Not much has physically changed to these well-travelled and relatively worldly wise young players, as they are used to globetrotting. Whatever the circumstances, they are still simply trying to get the ball in the hole as quickly as possible, but there must be a different mental approach now doing all this for a living.

The stark reality of this tour school epic may be put into perspective with the cold facts that out of over 900 entrants, the top 25 and ties only will receive a tour card. They are pretty sobering figures after the heady days on the Lancashire coast with the team support and the extra pampering a top event affords its stars.

There will be no such frills at any stage of the school of hard knocks, so these heroes have got to get back to ground quickly in order to maximise their chance of progression.

Having talked to the three nascent professionals, they are already right down to earth, with the important victory at Lytham logged but not flogged as if it is the ultimate. With two in situ for their first pro tests this week, it was almost chilling to hear how aware they are of dealing with the task at hand.

Gary Hurley talked to me after his first round in his first stage in Scotland and admitted that he was nervous playing his first professional round. Although nothing was different in the sense that he was trying to shoot as low as he possibly could, he felt slightly strange playing golf for a living for the first time in his life. He ended up with a one under par total having been five under. There must have been a sense of exhaustion after the Walker Cup; this is only natural, and indeed when pros are able they will try to take the week off after winning an event. This is because they understand how much winning, and particularly in a team environment, drains you.

Gary is maturely aware that everything he does from now on this year is for the chance to perform next year. As a business graduate from Maynooth College he is realistic about the idea of instant success.

Gavin Moynihan also curtailed his celebrations last Sunday night as he was teeing it up in his second professional event, but this time he gets the chance to earn a cheque in Italy.

It was the previous Walker Cup Gavin played in a couple of years ago that firmed up his decision to turn pro. He beat the best American player Patrick Rodgers. When he won the Irish Amateur he realised that he was improving, but when he took that success internationally he believed he had a future on tour. There don’t seem to be any starry-eyed notions of what life in the paid ranks is going to be like. There is a conviction in Gavin that the things he has done to get him where he is now are good enough to make him a successful pro – including casual monthly visits to his swing coach, the veteran club pro in Donabate Hugh Jackson. Although he has signed with Chubby Chandler’s ISM group and there may be pressure to change, I get the impression that Gavin is aware of the right decisions to make to assist his progress.

So the common sense flows from Gavin and Gary to the British Open contender Paul Dunne who was obviously delighted with the Walker Cup victory but not giddily so. He was not in a rush to tour school prequalification; he has a week’s rest before he goes to the first stage in Austria next week. I would imagine the break has not been coincidental and his schedule has been carefully chosen. He will be accompanied by his Walker Cup colleague Jack Hume, who is going as an amateur and has decided not to change ranks yet.

Paul’s pivotal moment came at Christmas in his third year at the University of Alabama. His team colleagues were all talking about their futures and their prospects as pros. That is when he decided that he was going to become a professional. He explained his ethos to me: when he was studying in Blackrock College it was his homework that took precedence over golf. When he went to the States on a golf scholarship his golf was prioritised. Like Gary, he got his University degree but he hopes he never has to use it.

He likes listening to Jason Day and Martin Kaymer when they give their post-round opinions. They echo a sentiment of his, which is: stick to the process instead of chasing results. With this in mind he is confident that he will make it as a professional, saying that it may take two weeks or two years, but it will happen. Paul is extremely grateful to the GUI for their support and Neil Manchip for his settling guidance.

There was one question I did not have to ask any of our three freshly hatched pros, and that was if they were good enough to make it on tour. They all spoke of their sense of belonging on tour with their now-fellow pros; it is not an alien environment. This is a testament to the GUI and particularly Manchip, the head coach, who they unanimously agreed had a strong positive influence on them in their formative years. The GUI had them travelling the world in the summer months with packed performance schedules which will make this week’s rush feel normal. The only difference is that they will not be picking up the bill anymore – their nurturing days are over.

This financial reality would test a player’s self-confidence instantly as there is no cheap way of getting around these days, and if you compromise financially you may well jeopardise your performance.

I have never talked to such a collectively and individually wise and practical group of young men. Their chances of a successful career at chasing a little white ball around the globe sound quite high and will not be for the lack of commitment, dedication, foresight, tenacity, inquisitiveness, hunger, modesty, belief, confidence and self-awareness. Their practical nature has filled me with a sense of realistic hope for the future of Irish professional golf, which of course will be self-perpetuating with the amateur game.

You have to weigh up the odds of making it out of a starting line of over 900. But their actions and, more importantly, their organised minds would lead me to be quite confident that these three newcomers on the professional block are already well ahead of the field.

They may well be playing now for a living but the process is still the same: hit it, find it and hit it again. Keep doing the important basics and the good stuff will happen sooner of later.