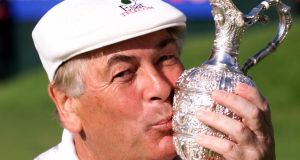 Christy O’Connor jnr wasn’t just a great, trailblazing golfer – he was a character. One of the stories O’Connor often related was of how he once sat on the floor of an airport terminal in Barcelona with Seve Ballesteros as he taught the legendary Spaniard how to play the spoons, which – during his many years on tour – was the Irishman’s party piece.

On the course, O’Connor performed with a different type of metal, none more spectacularly than the two-iron approach he hit to the 18th green in the 1989 Ryder Cup at The Belfry to defeat Fred Couples and effectively retain the famed gold trophy for Europe.

That iconic shot would forever be associated with O’Connor jnr, although his legacy went far beyond just one moment: he won four times on the PGA European Tour, claimed back-to-back Senior British Opens in 1999 and 2000 when he moved on to the seniors circuit; and he also became a golf architect of considerable acclaim with a portfolio of courses in Ireland and Europe.

Naturally, given the influence of his uncle Christy Snr, golf was the sport of calling for O’Connor – a native of Galway, from the fishing and farming village of Knocknacarra – too. But only after the work was done. As he once put it: “Life was tough for me growing up . . . the cows had to be milked before we went to school; then, on arrival back home, it was straight out on to the land again. In the longer evenings, that could be as late as nine o’clock and we would then have to do our lessons. And when the holidays came, we would steal away to the golf course . . . to play four holes.”

Yet, that calling to the golf course would later bring rich reward and much joy, not just to himself and his family, but also to a sporting nation – and beyond – as O’Connor established a presence on the European Tour.

O’Connor won four times on the main European Tour – the Martini International in 1975, the Irish Open that same year, the Jersey Open in 1989 and the British Masters in 1992 – and then progressed on to win two Senior British Opens, the 1999 championship at Royal Portrush and then a successful defence at Royal County Down in 2000.

It wasn’t all plain-sailing for O’Connor, who turned pro as a 16-year-old with what he claimed amounted to a “six handicap”. But he worked hard and took advice from his uncle and showed an ability to win, be it in Zambia or Kenya, or in more high-powered traditional venues such as Woburn.

His first experience of the Ryder Cup in 1975 was not a memorable one, as he lost on his two appearances as Britain and Ireland were heavily beaten by the US at Laurel Valley in Pennsylvania. But his return to the team some 14 years later, for the match at The Belfry, brought with it cult status as O’Connor, playing future US Masters champion Fred Couples in the singles, conjured up one of the greatest shots ever played in the Ryder Cup with a two-iron from 235 yards that finished up four feet from the flag.

That Ryder Cup provided the highlight of O’Connor’s career, but it was far from an isolated moment. In the 1985 British Open at Sandwich, he started with an opening round 64 that gave him the lead only to eventually finish in a share of third, two strokes behind Sandy Lyle. That was as close as O’Connor ever got to winning a Major championship, although his win in the 1992 British Masters – then one of the flagship events on tour – was extraordinary for a number of reasons, not least that he had survived a helicopter crash just a fortnight previously.

That crash had occurred on a site visit to City West Golf Course, which he designed. The helicopter lost power and fell 200 feet to the ground but O’Connor and the pilot, remarkably, emerged unscathed. The following week, O’Connor played in the PGA Championship at Wentworth and in the third round delayed shock set in and he was forced to withdraw from the championship.

On the following Monday, O’Connor’s recovery began by playing a few holes with his great friend Ballesteros at Woburn ahead of the British Masters. The two played some golf, practised on the putting green and enjoyed a few drinks afterwards. O’Connor was also given a putting tip by Ian Woosnam – who had won the US Masters the previous year – and when the tournament started, the Galwayman proceeded to defy all the odds.

For a time in the mid-1990s, it looked as if O’Connor’s career would end due to injury. “I could not lift a club because of the pain in my left wrist and arm. It was impossible to lift a cup of coffee or squeeze a tube of toothpaste,” he would recall, before Olympic doctor Conor O’Brien used laser treatment to give him a second chance.

Off the course, tragedy visited the O’Connor family in 1998 when Christy and Ann’s son Darren – a promising golfer in his own right – was killed in a car crash. Among those to offer their condolences was Jack Nicklaus, and O’Connor would use such messages as empowerment when the following year he won the Senior British Open at Royal Portrush.

By then, though, playing the game was almost secondary to his golf architect work as O’Connor – who numbers Headfort (New), Concra Wood, Mount Wolseley, Esker Hills, Galway Bay, Roganstown and Glasson among his work here in Ireland – established a reputation as one of the great designers of his era.

And, always, he was a tremendous supporter of charitable causes. Nobody knows for sure how many times that famed two-iron from the Belfry was auctioned off, but it brought in more than its share of contributions for charities close to O’Connor.

He will be sadly missed, on the course, and at the 19th hole.