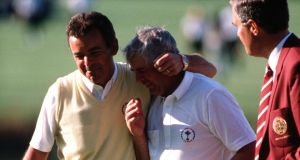 Although first played in 1927, the Irish Open’s revival in 1975 - when it was played at Woodbrook - constituted a significant time for golf. The championship hadn’t been played for 22 years and its return to the circuit was made all the more dramatic when Christy O’Connor Junior held off England’s Harry Bannerman to claim the title on the cliffside course north of Bray.

Of that win, O’Connor - who was also the club professional at Carlow Golf Club at the time - recalled how his uncle Christy Senior met him by the 18th green with a bottle of champagne. “He always preached to me that I shouldn’t get carried away, whatever the circumstances, but this was a bit special,” Junior would recall of that success, one of two he achieved on the European Tour that season.

Christy O’Connor Jnr went in as the underdog in his singles match with Fred Couples, a future Masters champion and a player who would go on to occupy the world number one position in the official rankings.

On that Sunday morning, O’Connor’s nerves weren’t helped by reading a newspaper article which pretty much wrote off his chances of taking on the American. “I felt terrible when I read it,” he would later acknowledge.

As it happened, O’Connor held his nerve impressively with his iconic two-iron approach to four feet on the 18th hole providing what the Galwayman describes as “the greatest and most emotional moment of my professional life.”

The two-iron shot, from 235 yards over water, was the shot of O’Connor’s life and gave Europe the point needed to retain the trophy. Couples, who had out-driven O’Connor throughout the match, had only a nine-iron to the last but fell to the pressure applied on him by the Irishman and missed the green with his approach.

With arms raised to the heavens and tears pouring down his face, O’Connor’s shot secured him a special place in Ryder Cup history.

Just 12 days after surviving a helicopter crash, when the aircraft plunged 200 feet as he surveyed the course he was designing at City West in Co Dublin, O’Connor claimed the British Masters at Woburn when beating Zimbabwe’s Tony Johnstone in a play-off.

In the previous week’s PGA Championship at Wentworth, O’Connor had been forced to withdraw after the third round due to suffering delayed shock from the helicopter crash. However, an extra week’s recuperation - and a putting tip from his friend Ian Woosnam - meant O’Connor contended in the British Masters and produced a string of recovery shots down the stretch of his final round.

On the 16th, where his tee shot was pulled into the trees, O’Connor pulled out his two-iron for a 190 yards approach to the green and steered his shot through a narrow gap to find the trees and, again, on the 17th, he played a magnificent recovery from the trees to find the green. On the 18th in regulation, he rolled in a 25 footer to force his way into a play-off which he won at the first extra hole. “I’m glad to be alive and I’m glad to show the young lads a thing,” said O’Connor, of leaving a field which included Seve Ballesteros, Nick Faldo, Bernhard Langer and Paul Azinger in his wake.

Having claimed the title at Royal Portrush in 1999, O’Connor became just the second man in history to successfully defend the Senior British Open. This time, he did it at Royal County Down with rounds of 69-68-70-68 for a nine-under-par total of 275 for a two stroke winning margin over South Africa’s John Bland.

“It is very special to win on the best course in the world, and it’s even better to do it in front of all these fantastic fans,” remarked O’Connor after his win, which confirmed him as one of the brightest lights on the then fledgling Seniors Tour circuit.

Up to O’Connor’s back-to-back wins in the championship (confined to players Over 50), only Brian Barnes had previously managed to retain the title.