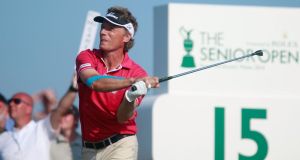 Bernhard Langer in action during the first round of the British Senior Open Championship at Royal Porthcawl in Bridgend, Wales. Photo: Phil Inglis/Getty Images

Irishman Philip Walton threatened to challenge for the early lead in the Seniors Open Championship at Royal Porthcawl on the South Wales coast yesterday when he swept to the turn in two under par 33.

But a miserable three-hole spell during the homeward half ruined his chances of going to the top of the leaderboard.

However the 52-year-old former Ryder Cup player from Dublin was still pretty happy with his overall performance and is certainly not out of contention after an opening 72.

Birdies on the seventh and eighth took him to the turn in 33 but then after four consecutive pars he slipped to three bogeys on the bounce.

He drove too far into trouble on 14, then shot through the green and finished by missing a six-foot putt,bunkered his tee shot to the short 15th and after splashing out failed with an eight-footer. A poor tee shot at the 16th led to another dropped stroke.

Nevertheless the Irishman was quite content and looking forward to the second round today. “I hit the ball well and feel I have a good round in me to put me in a challenging position,” he said.

Walton was joined on the 72 mark later in the day by 61-year-old Des Smyth,one of the vice-Captains for September’s Ryder Cup match at Gleneagles.

Smyth finished with a birdie four for an inward half of 35.

They both go into the second round today seven strokes behind leader Bernhard Langer who played some brilliant golf for a 65 and finished with two birdies.

The German star is two in front of American Bob Tway with Englishman Chris Williams a further stroke back.

Colin Montgomerie made a solid if unspectacular start to his bid to win three senior majors in a season. The 51-year-old, who has already won the Senior PGA Championship and the Senior US Open, carded a one-over par 72 during the first round in Wales..

With three rounds left to play it is a gap that can conceivably be overhauled, but Montgomerie has played down his chances and suggested the course is ill-suited to his game.

“I do prefer the American -style of courses. This is guesswork and I’m not very good at guessing. So I’ve got to go back to the poker tables and guess a bit more and see how I go tomorrow.”

Ronan Rafferty, who played at Porthcawl in the 1980 Amateur Championship and has featured in several Home Internationals on the South Wales links but admits to playing very little at the moment, did not fire on all cylinders. He reached the turn in two over par 37 and dropped two further strokes for a 75.

Mark McNulty who hails from Zimbabwe but was granted Irish citizenship in 2003 due to a maternal grandmother coming from Ballymena returned a 76 despite two double bogey sevens while Dennis O’Sullivan had a miserable round ending with an 80.