Golf’s original rules: simple but weird for a harder game back then

Eighteen holes, but only 13 rules. The world was a little simpler in 1744, even if golf wasn’t 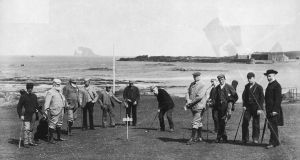 The bodies that run the game of golf announced a plan on Monday to simplify and modernise the rules beginning in 2019. For example, penalty drops can be taken from a lower height, and caddies will no longer be able to line up their players when putting.

But simplification and modernisation don’t automatically go hand in hand. Want more straightforward rules? Go in the other direction, back in time, to 1744, the year of the first known written rules of golf, drawn up by golfers in Edinburgh who played on the Leith Links.

The 13 rules, rendered here mostly in their original form, are generally simple, though sometimes a bit weird. They also reveal that golf was a lot harder back then.

1 You must tee your ball within a club’s length of the hole.

No, it wasn’t miniature golf. By “hole”, the rules mean the previous hole. In the absence of tee boxes, golfers just set up near the last hole and fired away.

2 Your tee must be upon the ground.

Golfers did not use wooden tees; rather they used wet sand to build a little mound to hit off. This rule clarified that they could not build that mound on top of something else.

3 You are not to change the ball which you strike off the tee.

“One hole, one ball” was the rule. This mattered a lot because balls, made of leather and stuffed with feathers, often fell apart. Should that happen before you completed the hole, tough luck – you lost the hole.

4 You are not to remove stones, bones or any break club for the sake of playing your ball, except upon the fair green, and that only within a club’s length of your ball.

A break club was anything hard that might break your club if you struck it. Clubs had hickory shafts and broke easily. Once again, the 1744 rules essentially say, “That’s your problem.” This rule also raises the disturbing image of a golf course littered with bones for some reason. “Links land was pretty rough territory,” said David Staebler, director of rules education of the US Golf Association. “I suspect some of the bones were sheep caught by predators, perhaps because the shepherd was distracted by practicing golf shots.”

The “fair green” was any area where there was grass tended by sheep. Even the smoothest areas on a course were, at best, the equivalent of the first cut of rough today.

5 If your ball come among watter, or any wattery filth, you are at liberty to take out your ball, and bringing it behind the hazard and teeing it, you may play it with any club and allow your adversary a stroke for so getting out your ball.

One of the new rules for 2019 allows players to fix spike marks that might slightly alter their ball’s trajectory. The golfers of 1744 were a hardier bunch, regularly dealing with “wattery filth.”

6 If your balls be found anywhere touching one another, you are to lift the first ball, till you play the last.

This was an early relief rule, saying that unlike stones or bones, another player’s ball could be moved to make a shot.

7 At holling, you are to play your ball honestly for the hole, and not to play upon your adversary’s ball, not lying in your way to the hole.

“Holling” meant “putting”. This rule prevents chicanery involving the stymie rule. Until 1952 in matchplay, if another player’s ball was between yours and the hole, you couldn’t make him move it. This rule clarified that if a stymie occurred naturally, okay, but players couldn’t intentionally go for one.

8 If you should lose your ball, by its being taken up, or any other way, you are to go back to the spot where you struck last and drop another ball, and allow your adversary a stroke for the misfortune.

News conference, 1744: “I lost my ball somewhere down by the sheep and bones. That cost me a stroke. Alack, what a misfortune.”

9 No man at holling his ball is to be allowed to mark his way to the hole with his club or anything else.

With the putting area more like the rough we know today, it was to one’s benefit to comb the area between ball and hole to make for a smoother ride. One of the 2019 rules is not far from this one. “An accidental touch of the sacred area between the ball and the hole is not a breach of the rules any more,” Staebler said. “We’ve moved the rule back to what was intended: you can touch it as long as you don’t improve the path.”

10 If a ball be stopp’d by any person, horse, dog, or anything else, the ball so stopp’d must be play’d where it lyes.

Bones and “wattery filth” not challenging enough? Apparently horses and dogs (as well as persons) were roaming the course stopping balls willy-nilly. Golf courses were not clubs in gated communities, but part of the fabric of life, with plenty of other people and their animals going about their business on the land.

11 If you draw your club in order to strike and proceed so far in the stroke as to be bringing down your club; if then, your club shall break, in any way, it is to be accounted a stroke.

Another rule about what happens when a club breaks, which may not seem so important in the titanium age.

12 He whose ball lyes farthest from the hole is obliged to play first.

One of the longest-standing rules in golf, or indeed in sports.

13 Neither trench, ditch or dyke, made for the preservation of the links, nor the Scholar’s Holes or the Soldier’s Lines, shall be accounted a hazard; but the ball is to be taken out teed and play’d with any iron club.

The first house rules. The Leith course had spots with cute nicknames, much like “the Road Hole” or “Amen Corner.”

Eighteen holes, but only 13 rules. The world was a little simpler in 1744, even if golf wasn’t.