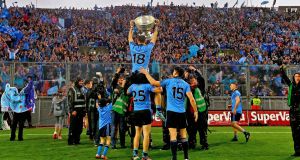 Ten years ago, then GAA director general Liam Mulvihill said in a section subtitled ‘Dublin’ that the “excellent work being done in Dublin is evident in the success of the underage teams from the capital in Féile na nGael and Féile Peile”.

He also said: “As a result of the money pumped in by the Irish Sports Council, the Leinster Council, Dublin County Committee and ourselves a total of 46 new people are now involved in games development activities in the city.

“I have said in the past that we cannot expect immediate recompense from this investment, as it is a long-term project and we must persevere with the hard, unfashionable work which draws no plaudits, but which is vital in terms of planting seeds for future success.”

The years have rolled by and not only has the unfashionable work drawn no plaudits but its future success has proved a source of anxiety rather than celebration.

There were further questions at this week’s launch of the GAA annual accounts about the huge disproportion between Dublin’s games development grant of €1.46 million and that drawn down by other counties. Put in context it means that Dublin get 47 per cent of the total grants in this category disbursed to all the counties in Ireland.

To recap, the original funding announced by Dublin in 2005 involved the Irish Sports Council investing €1 million a year to develop participation in Gaelic games in the county. This was used to appoint Games Promotion Officers (GPOs) to clubs in order that they could assist with training and organisation as well as devising and implementing out-reach programmes to local schools.

The problem now is that, in contrast to 10 years ago when Dublin were in the midst of a 16-year senior All-Ireland drought, the county has won three of the last five. It also has access to greater sponsorship opportunities than other counties and the current deal with insurance multinational AIG is believed at nearly €1 million per annum to be comfortably more than twice what any other county can command.

The population advantages of having 1.3 million living in the county makes its attractions to advertisers and media obvious.

An interesting point made in the middle of Croke Park stadium director Peter McKenna’s presentation was his reference to ‘Dublin’s domination in Leinster’ being a factor in the stadium’s €600,000 drop in match-day rental income.

Ironically one of the reasons counties in Leinster won’t vote to send Dublin out of Croke Park for championship fixtures – unless drawn against them – is that there’s more gate receipts for distribution if they’re kept in the stadium.

Now there is an acknowledgement that the champions’ domination of the province is affecting gate receipts.

It has equally been pointed out that addressing Dublin’s imperium in Leinster is not really a matter for Dublin. That is true but as the county powers on with its development programme and growing success in bringing through young players to senior fulfilment the one thing most conspicuously lacking in Leinster is the sort of opposition that Meath and Kildare used to provide in the province.

Those counties can respond mournfully that their slice of the national games development cake – allowing that further grants are sourced through the Leinster Council in a manner that doesn’t favour Dublin so disproportionately – is respectively €45,600 and €42,600.

Per capita that means that Dublin get more than a euro whereas Meath and Kildare are on 24 cent and 20 cent.

GAA director of finance Tom Ryan said at Tuesday’s launch of accounts that there was a sub-committee appointed under the auspices of the National Finance Committee to look specifically at that question.

“It’s not a question of trying to take resources away from particular counties, the job really should be to provide extra for all of the other counties. It’s going to be a job of work that will probably take up to three years in terms of rebalancing competition dividends and things like that, but you will see some changes emerging from that group over the course of the next 18 months to three years.”

Despite Ryan’s assurances it’s hard to see how any rebalancing can take place without reducing the money wealthier counties currently receive.

Much of the commercial appeal of the games is tied up with their profile in the country’s biggest population centre. Neither do Dublin avail of the sort of fund-raising capacities that some of their national rivals can through strong immigrant identification in the US or active supporters’ clubs.

GPOs must prove their worth. They have periodic review meetings every few months in which they lay out targets relating to both their clubs and local schools for the next period and account for progress in the previous one.

For the first time ever in Dublin the GAA is a visible, recreational presence throughout the county. The question for the GAA and it’s a very hard one to address is: has it all been too much of a success? smoran@irishtimes.com