Player sustained injury while training for his club Dromore 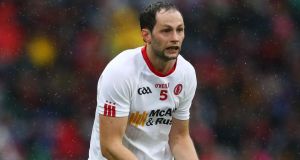 Tyrone defender Ronan McNabb’s knee injury is worse than was first feared with the news that he has damaged his cruciate ligament. The Dromore man sustained the injury at club training on Friday night, and at first it was thought he had dislocated his knee.

A scan in Belfast earlier this week revealed that he has suffered a partial tear of his ACL and while he could conceivably play on, the worst case scenario is that he may require surgery, in which case he could miss a huge chunk of next season.

It’s a devastating blow to the player, one of Tyrone’s most consistent performers throughout the summer as they recovered from losing in the preliminary round of the Ulster championship to reach the All-Ireland semi-finals via the qualifiers before losing narrowly to reigning champions Kerry.

McNabb had been training in preparation for Sunday’s Tyrone club championship quarter-final with Omagh and the reigning champions are set to be without a county player as well. Joe McMahon had a minor operation prior to the Kerry game for an injury sustained kicking a left-footed point in the opening minutes of Tyrone’s quarter-final win over Monaghan at Croke Park. The operation revealed an underlying problem and he hasn’t trained since with fears growing that his season could be over.

Wexford will start tomorrow’s All-Ireland under-21 hurling final against Limerick with the same team which eased past Antrim in their semi-final.

Attack Manager JJ Doyle has resisted any temptation to change the team which also beat Kilkenny in the Leinster final: senior star Conor McDonald will front the attack from full forward.

Tomorrow’s final – which has a 7pm start at Semple Stadium – also sees Wexford follow suit off opponents Limerick, as their manager John Kiely also announced an unchanged team from that which took out All-Ireland champions Clare in their All-Ireland semi-final.