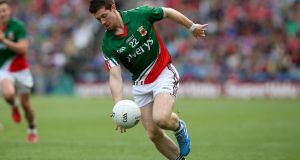 Enda Varley, in action here for Mayo will line out for St Vincent’s in 2016. Photograph: Donall Farmer/Inpho

The trio will join the famous north Dublin club who have won two of the last three Dublin senior football championships, as well as their third All-Ireland club title in 2014.

Varley scored two points in Mayo’s 2012 All-Ireland final defeat to Donegal, and had appeared regularly for the Connacht county before being cut from last year’s panel ahead of the championship. Breathnach, now 29 featured in the FBD League this year for Galway operating at centre half back. Although the Naomh Anna, Leitir Móir club man featured from 2006 until 2011 as a forward for the Tribesmen.

While Smyth is a Westmeath panellist from the Mullingar Shamrocks club, with the 26-year old playing at corner forward in the county’s historic win over Meath in last summer’s Leinster semi-final.

Among the forwards already available to the club are Diarmuid Connolly, Tomas Quinn, Dublin panellist Shane Carthy, while others who featured prominently for the county’s underage teams include Gavin Burke and Ciarán Dorney.

The recent additions, all living and working in the capital, are certain to add to the stiff competition within Tommy Conroy’s squad.

While St Vincent’s are not a club with a major tradition of recruiting outside talent, they already have Sligo half back Brendan Egan available to them.