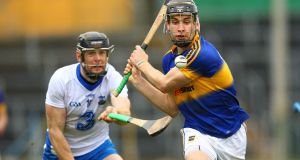 John McGrath: has caught the eye in Tipperary’s attack during the league. Photograph: Ken Sutton/Inpho

Sligo v Roscommon, Markievicz Park, 5.0
Roscommon’s rise to prominence continues at the grade where the county has made most impact and is in pursuit of a third successive provincial title. The win over Galway was more comfortable than it appeared. They will be wary of Sligo but will make the final.

Leitrim v Mayo, Páirc Seán Mac Diarmada, 5.0
Leitrim have a young team and home advantage – and pushed Mayo for a while last year – but the visitors are favourites, featuring a number of the 2013 All-Ireland-winning minors. They haven’t won the province for a lengthy seven years.

Dublin v Laois, Parnell Park, 2.0
This promises to be a forward-driven encounter with Laois’s Eoin Lowry awarded the first monthly award in the U-21 grade after an eye-catching display against Louth whereas Evan O’Carroll led the second-half revival against Wicklow. Dublin’s defence will need to be vigilant but Con O’Callaghan’s form up front can help the champions progress.

Tipperary v Cork, Semple Stadium
Both teams emerged from last week with something encouraging but short of fulfilment. Cork performed to a high level against Kilkenny – barring the final crucial minutes which saw their six-point lead overhauled. Wearing their 1 916 commemorative jerseys, they put it up to the empire but were beaten after a commendable struggle. Tipp’s equaliser was last-gasp in a match they could have won but at least they halted the trend of getting beaten at the death. Last year the teams put on a firestorm of goals with Cork again losing late. Among Cork’s consolations was the form of Séamus Harnedy as ball winner and finisher and the competitiveness around the middle third. The teams could end up facing each other in the relegation play-off but Tipperary have a bit in hand. Up front. Séamus Callanan still hasn’t returned, John O’Dwyer has been sparingly used, Jason Forde recently injured, Noel McGrath’s not back up to speed and only John McGrath has been consistently on the button. Ronan Maher has shown well at centre back and all in all the home side are more likely, as Cork focus on the last-chance saloon.

Waterford v Galway, Walsh Park
Waterford’s visitors after losing their impressive winning sequence are Galway, against whom last year’s serious ascent began in the league quarter-finals. Without detracting from Dublin’s display, Waterford were probably going to react to the highs of beating Cork, Kilkenny and Tipp in successive matches – the latter two the only counties to have beaten them last year. So far the league has been positive and the return of Pauric Mahony to training this week is another boost even if he’s unlikely to feature this weekend. The team is likely to be fairly experimental given that they’re already in the quarter-finals. Galway have work to do given their head-to-head with Tipperary makes them more likely candidates for the relegation final than the play-offs and that motivation – after what has been a hit and miss campaign – can edge them through here.

Kilkenny v Dublin, Nowlan Park
In ways Dublin’s resilience has been the story of the campaign. Given the rumours of discord and the awful hammering on the first weekend against Tipperary, Ger Cunningham’s side have recovered impressively and gave Waterford a first taste of league defeat in nearly two years. After last year’s difficulties, Kilkenny are back in remorseless form, doing what it takes and giving a run to a few new faces – albeit with mixed results. Dublin won in Nowlan Park a year ago against what was virtually a shadow team given Kilkenny’s injuries and club commitments but their season also came adrift in the league semi-final when losing a 10-point lead to Cork. Both teams are already in the quarter-finals and Dublin’s good form – especially from Liam Rushe and Eamon Dillon – will add confidence but the it’s hard to see Kilkenny slipping.

Offaly v Kerry, Birr
Great result for Offaly in beating Wexford well last week to all but nail down a quarter-final spot, which will give Eamonn Kelly a solid start to his first year. Kerry have found the going tough against the bigger beasts in the division but will hope to finish well before a likely relegation play-off. The home side, with Shane Dooley in murderous scoring form, should prove too strong.

Laois v Wexford, O’Moore Park
A troubling season continues for Wexford after last week’s concession of a strong opening lead even allowing for having arguably their best player, Liam Ryan, sent off in the second half. Laois have however had an even bleaker campaign, which is likely to end pointless.

Clare v Limerick, Cusack Park
The league quarter-finals may have assuaged the concerns of counties who find the five-match programme too abbreviated but with eight of the top 12 qualifying and the other four guaranteed a relegation play-off there is a slackness about the last day of the season, alleviated only by this fixture, which will decide who gets promoted to the top flight. Both counties have won all their games to date with Limerick slightly in front by virtue of scoring difference, which will be of relevance only in the case of a draw. Clare have been working hard but are missing Tony Kelly for this although Podge Collins is back after a year out. There are also some concerns about their scoring capacity (Limerick have twice as many goals). The visitors are on the crest of a wave. All-Ireland U-21 champions, three colleges in the Fitzgibbon semi-finals, including the two finalists and this week their first All-Ireland club champions, Na Piarsaigh. That momentum may carry through in Ennis.