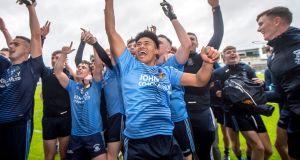 Four months after they last played a competitive game, 25 years after they first competed in the top tier of the Leinster Colleges senior championship and 100 years after the first ever running of the competition, St. Joseph’s of Rochfortbridge added their name to the Brother Bosco Cup roll of honour thanks to a four-point win over reigning champions Naas CBS on Friday.

Any idea that there might be some ring rust or a lack of sharpness was blown out of the water when a stunning solo goal from Devin Hill got St. Joseph’s off to the best possible start after just 49 seconds, but champions Naas were back on level terms within five minutes as their attacking play clicked into gear.

Poor Rochfortbridge shooting and an incredible goalline block from Paddy McDermott meant the Westmeath school only led by 1-5 to 0-6 at the interval, having played with a significant wind, and it looked as if the champions were set to justify their status as pre-match favourites when they quickly drew level through scores from Alex Beirne and James Dalton. Hill and Rory Keyes replied in kind as the standard of play crept higher and higher, with Naas taking their first lead when a sublime pass from Drew Costello set up wing back Kevin Quinn.

Yet they couldn’t shake off their opponents and two crucial moments early in the final quarter proved decisive. An inch-perfect penalty from Brandon Kelly and a second yellow card for centre forward Alex Beirne were blows that Naas CBS couldn’t handle and despite their best efforts late points from Jack Torpey and Devin Hill sealed the win for St. Joseph’s.