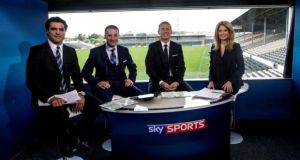 An average of just 9,000 viewers in Britain tuned in to Sky Sports 3’s coverage of Saturday’s Connacht football semi-final between Galway and Sligo. The live attendance at the match was only marginally smaller at 8,250.

According to figures supplied to The Irish Times, the television audience for the match peaked at 22,000. Ninety minutes of the two-and-a-half hour broadcast clashed with World Cup matches in Brazil, firstly Argentina-Iran and later Germany-Ghana.

Sky is not the main rights holder in the British market, as Premier Sports supplies coverage of all televised championship matches apart from those to which Sky has exclusive access.

It is believed that Premier’s broadcast of the Munster hurling semi-final between Cork and Clare the previous weekend attracted roughly the same audience as Sky did last Saturday but without BSkyB’s big subscriber base, estimated to be about 10,000,000 in total although there are no separate figures available for subscriptions to Sky Sports.

These figures are for Irish residential subscribers only - not including those watching in HD - and do not include those who watched the match in pubs or in Britain.