September Road: Joe Brolly can get it wrong in his bombastic delivery 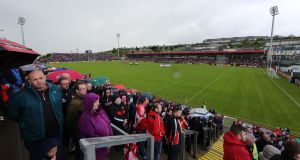 Derry were easily brushed aside by Tyrone at Celtic Park on Sunday. Photograph: Inpho

While the erudite Joe Brolly has his critics, September Road feels that he makes a lot of salient points, lost as some of it is in his bombastic delivery. However, the pundit can also get it wrong.

Twitter was aflame a couple of weeks ago when Brolly wrote that Jim McGuinness “never picked Paddy [McBrearty] to start throughout his tenure”. In fact, McBrearty started 19 of McGuinness’s 24 championship games.

On Sunday Brolly noted that Celtic Park in Derry City used to be a “citadel” and that the team he played on went through a 10-year unbeaten run there. Accurate? Not exactly.

Brolly made his debut in 1990, and was part of the Derry team which won championship games at the venue for three years before losing in 1994 to Down. They later lost a league game to Laois that autumn, and didn’t lose for 7½ years before Cavan beat them in February 2002.

They DID go unbeaten in championship at Celtic Park from 1995-2009, but only played five games at the venue. And Joe had long blown his final kiss in the red and white in any case...

There was much wailing and gnashing of teeth after Kildare and Wexford’s forgettable 0-9 to 0-8 tie at HQ on Saturday but low-scoring clashes are nothing new.

All of which looked positively free-scoring compared to 2011 (scoreboard, inset), when Dublin beat Donegal 0-8 to 0-6.

It may not be any use in the vexed nature v nurture debate – given that they’re usually one and the same in this case – but there is still something striking about the number of brothers playing football and hurling at senior intercounty level.

Tyrone’s McCanns, Brennans, Cavanaghs et al did the business yesterday, but few could match the record of the McGrattans from the Ballygalget hurling club in Co Down.

They entered the second-ever Kilmacud Sevens in 1973, with The Irish Times reporting that their nine-man squad consisted of seven McGrattan brothers – Padraig, Liam, Seamus, Eamonn, Kevin, Gearoid and Aidan, sons of secretary Padraig – and two of their cousins Eamonn and Sean McGrattan.

Sweepers unlikely to clear our punters

RTÉ’s Michael Duignan was not happy during the Tipp v Cork clash. “Something will have to be done, this sweeper system is destroying the game. There is no man-to-man stuff, people are going to stop going to the games...”

But such a doomsday scenario has long been predicted in the big ball code and attendances have never been healthier. Even when football’s colour seemed to have faded, with mass defences prominent, tribalism kept punters coming.

So would a lack of goals and big hits in hurling affect attendances? We doubt it.

14-51: What Kildare had conceded in their previous three games at Croke Park prior to Saturday’s tussle with Wexford.

“A GAA legend is back in the Wexford panel for the Leinster SHC game with Dublin – AN Other is listed as number 26.” - Eagle-eyed Denis Hurley (@Denis_Hurley) welcomes the summer’s first sighting of the ubiquitous, ageless dual star