Seán Moran: Sympathy for the All Star selector in short supply 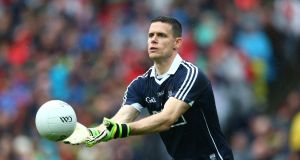 This year’s Big Idea (actually, last year’s as well) was that Stephen Cluxton was being overlooked because he wasn’t media-friendly. Photograph: Cathal Noonan/Inpho

Please allow me to introduce myself
I’m a man of doubtful taste
I’ve been around for a long, long year
Laid many men’s All Stars to waste

Technically – and some of Old Moran’s friends were supportively insistent about this – there was no shame in it but he had been picking All Stars for nearly 30 years. At first it just seemed like the thing to do.

He was carried away by the glamour and the status of the whole thing and the big dinners in the Burlington. Some years his conscience made him stop and walk away – or others did it for him – but he always came back, beguiled by the power and perks.

Of course he also got to spend hours rewatching matches, many of which the memory had blamelessly obscured, and sitting in rooms squabbling but, if you like the sound of your own voice, where’s the hardship in that?

There were times in the early days when a drinks trolley clanked into the room in mid-afternoon and smoking was still allowed and it all got a bit uncomfortable even for Old Moran, who in his young days was an enthusiastic subscriber to both vices.

But amidst the cantankerousness and taking offence, there was the reassurance of important business being done.

Yes, there would be consequences and the bane of the All Star selector in those times was commentary on the winners that could be categorised as the ‘19-man team’. This was a critical strategy – few wished to waste newsprint by agreeing with selections – involving four named players, whose omission might be described as ‘bad luck’ or ‘puzzling’ or even ‘a disgrace’.

Frequently though there appeared to be no room to list those who needed to be deselected in order to make way for the wronged.

Old Moran had long suppressed any tendency to indignation when he saw criticism of All Star teams. Nothing new under the sun – or more accurately the apparently inexhaustible clouds, which spilled down onto his poorly tiled roof.

The medium of dissent had changed radically but the authors of the 19-man teams used to have to put their names to what they wrote, a burden with which most on social media were unencumbered. So why not spell out as stridently as possible any misgivings about the selection?

For an elderly selector things had changed and not for the better. There had been so few matches in the early days that a footballer of hurler could get an All Star for one good performance. That made things easier to remember.

“There was one provincial quarter-final and I swear he was there on his weaker foot, kicking a point with his bootlaces undone while Theo ‘Terminator’ O’Loughlin (who, remember, we nominated at right half back) was punching the back of his head.”

Nowadays the number of matches was unending and younger colleagues appeared to have tracked every movement of every player as well as their facial expressions when being substituted.

This had the disagreeable effect of forcing Old Moran to do more research of his own although in truth it was often easier to play along:  “I feel my young colleague has laid out an excellent case with which I for one cannot disagree,” – before adding in a desperate attempt at relevance – “and in fact even when he was dispossessed by ‘Spud’ Jeffares that time, he had ehhh, slipped in the wet,” – and for crucial indemnity – “as far as I could see”.

Then you had managers who picked players in one position and then allowed them play wherever they wanted and when you reflected that in the All Stars, there were complaints as to why an award winner wasn’t playing where he was selected.

There were obviously days when he felt strangely passionate about particular discussions but once his fellow selectors worked out that this invariably meant that the player he was railing against had a tattoo, they kept straight faces but howled with laughter later over pints, falling uncomfortably silent when he waddled in, scanning the saloon bar for a group that was about to order another round.

This year’s Big Idea (actually, last year’s as well) was that Stephen Cluxton was being overlooked because he wasn’t media-friendly.

Thinking long and hard about the (joint-record) five All Stars the Dublin goalkeeper had previously received, Old Moran tried to remember had the player been incurably extrovert in those days. Had something terrible happened?

No – because it came back to him that when Cluxton had been appointed in some counterintuitive way to captain Ireland in the 2011 International Series Down Under, Old Moran had to explain wearily to loud Australian journalists that yes, the GAA had sent out a captain, who wouldn’t be talking to the media – not that he and his colleagues looked as weary as vice-captain Ciarán McKeever, who got to take up the slack at press conferences.

It wasn’t the end of Cluxton’s All Stars, though, nor could it be, as were they to be confined to those who had a cheery word for journalists, the scheme would have as vibrant a future as Old Moran’s pension portfolio of ‘bullet-proof’ financial stocks.

If any sense of vexation was best kept at bay, there were occasional strains. The modern idiom for the discussion of All Stars tends to favour sweeping statements.

A measured debate on the competing claims of players could always be relied upon to degenerate into what appears to be regarded as the last word on the subject: joke!

Sometimes if the disagreement is sufficiently vehement this can become, ‘joke shop’ – presumably because the idea of the relevant player being included/excluded is so comically discreditable that it can be traded in retail outlets.

In keeping with what he clearly felt was his inspired parody of Sympathy for the Devil he could have gone on to extend the exercise by listing all of the selection controversies at which he had been present, maybe starting with Brian Whelahan’s omission in 1994 when Hurler of the Year, but the attic was too draughty and the winter wind too biting.

Anyway, the All Stars would be sailing to Philadelphia at the end of the month.

Cheered by the prospect of clean, dry hotel rooms and the invariably reasonable bills of fare to be found in American diners, Old Moran removed the low-watt bulb from his attic light and carried it downstairs to the parlour.

“Ask not for whom the Liberty Bell tolls,” he cackled.