Seán Moran: No easy way out for GAA in face of coronavirus 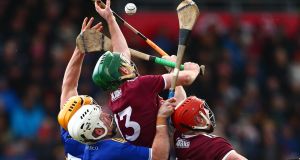 Tipperary’s Ronan Maher and Cian Darcy with Galway’s Conor Cooney and Conor Whelan. Hurling receipts are going to be down this year because of the redrawing of Division 1. Photograph: Tom O’Hanlon/Inpho

There is a sense of the GAA walking on eggshells as the country anxiously waits for whatever phase of the virus that shuts down everything.

It is, after all, uncomfortable to be looking at something with such serious public health implications, and worrying about what league matches are going to be played.

It has, however, drastic implications for the running of the 2020 season, and the GAA must be dreading some of the potential outcomes.

League revenue is not vast, but neither is it negligible. In each of the past three seasons it has generated around 15 per cent of the GAA’s gate receipts, just over €5 million.

This season, if it runs as far as next weekend, will probably have taken in around 75 per cent of that allowing that hurling receipts are going to be down this year because of the redrawing of Division 1 and depending on the equivalent final in football, which, with the right pairing, can be a bonanza.

The cash shortfall wouldn’t, therefore, be enormous, but in terms of finishing the competition there would be an administrative hangover.

Solutions would not be that easy. April looms as an inviting month of no intercounty activity, during which the health authorities would have additional weeks of getting to grips with coronavirus, also known as Covid-19. At the end of which everyone would have a better idea of where the country stands.

Yet it is unlikely to be available to run off stray league fixtures without undermining smaller-scale club activity, which may be in a position to proceed.

There is the possibility of staging matches behind closed doors, but in a GAA context what would that achieve apart from the bare minimum of putting names on trophies? It would actually depress revenues as overheads would be incurred without any income.

Were the outbreak to reach a level where public health considerations became more acute, it’s possible that not even unattended matches would be deemed prudent.

That is not, however, the main concern in a games’ sense. With the Tailteann Cup due to begin this summer as football’s first widespread attempt to get a tiered football championship up and running, the final positions in AFL Divisions Two and Three are needed, as the top two counties in the latter qualify for the Sam Maguire whereas the bottom two in the former are consigned to the Tailteann.

It may be that the issues involved can be resolved straightforwardly – ie with a minimum of critical fixtures overhanging a potentially abandoned league campaign.

The most forbidding vista doesn’t concern the list of contestants this summer but whether there will be any championship to contest.

You don’t have to be running scared of social media, and its curious combination of Trumpian disregard for empirical evidence with the worldview of an Old Testament prophet, to harbour pessimistic thoughts about what lies in store.

Noting the deepening gloom of Government media conferences and their increasingly alarming projections, it is difficult to rule out worst-case scenarios as blithely as we could have a couple of weeks ago.

This outlines the shadow of what’s stalking the GAA in its administration of the main commercial and promotional activities of the year. So much effort has gone into the architecture of modern championships that there is no room for manoeuvre.

It’s just not possible to set aside a few weeks here and there for catch-up weekends. Under the current structure the schedules are tightly packed with the provincial round robins in hurling and, later in the summer, the same format for the All-Ireland football quarter-finals.

A reversion to straight knock-out wouldn’t be ideal in terms of the championship or its revenues, but it would be one way of finding space in what may become a very truncated season.

If such drastic rescheduling were to prove necessary, it would obviously create potential for “sliding doors” outcomes. In a strange and continuing echo of the events of a century ago, the GAA is facing its first pandemic since the Spanish flu of 1918.

That summer Wexford footballers in apparent lockstep with Dublin 100 years later were in pursuit of a four-in-a-row, the first such achievement in the association’s history.

The championship wasn’t concluded until the following January, as the disease affected what historians Drs Anthony Kinsella and Ida Milne estimate as 800,000 people in Ireland, with official records putting the number of fatalities at 20,057.

In the football final, eventually played in January 2019, Wexford defeated Tipperary in the hardest-won of their four titles by 0-5 to 0-4, and it’s possible to speculate an alternative outcome had Davey Tobin, scorer of two goals in the semi-final win over Mayo, not been unavailable because of the flu.

The GAA were fortunate in one respect in the summer of 1918. Gaelic Sunday, described by official association historian Marcus de Búrca as “the greatest single act of defiance outside the purely political sphere between 1916 and 1922”, saw the GAA defy the permit system established by the British government in an attempt to control activities such as Gaelic games and which had led to disruption by the police.

An estimated 54,000 played games all over Ireland on August 4th, and the authorities accepted defeat by not even trying to intervene.

At the Croke Park Museum summer school in 2018, Ida Milne pointed out that Gaelic Sunday had got lucky 100 years previously. The Spanish flu hit Ireland in three waves – early summer and late autumn 1918 and early spring 1919. The GAA’s great protest took place when the disease was in abeyance in August 1918.

They could do with a bit of that luck this time around as well.