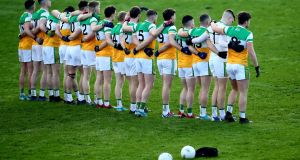 Offaly line up before a game against Longford in January. Photograph: James Crombie/Inpho

Last week Offaly GAA lost Fr Tom Scully to Covid-19. An inspirational figure, he is widely credited within the county with a pioneering role in the work that led to breakthrough football All-Irelands in 1971 and ‘72.

It was a reminder of the singular place Offaly occupies in the GAA, as one of only eight counties to have won both football and hurling All-Irelands. It has near as half the population of the next smallest and its successes aren’t buried in the dust of centuries but in recent decades.

This year with the prospect of maybe no championship on the horizon – or as accepted by the GAA on Tuesday, no activity before July – the county was about to compete in the latter stages of neither the Sam Maguire nor Liam MacCarthy.

It is a source of irritation to some that every new low to which Offaly’s hurlers have tumbled gets treated like some epochal shift and even within the county there is weariness that each nadir gets held up for public gaze.

That process is probably at an end now that they sit rooted in hurling’s Tier Three Ring Cup.

The county’s footballers haven’t attracted that sort of ‘where are they now?’ attention in a long time but were the first to win Leinster. The 1960 team had beaten two of the previous three All-Ireland champions, Dublin and Louth, on the way to winning the province.

Offaly were well positioned to prevent a history-making Down team from even getting to the All-Ireland final the year they became the first to take Sam Maguire across the border, but lost a seven-point half-time lead to draw the semi-final and lose the replay by two – far closer than Kerry got in the final.

A year later Offaly were reacquainted with Down and drew a record crowd of 90,556. The Ulster champions were deserving winners but on the narrowest of margins.

Fr Scully took over a team composed of talented players from the 1964 All-Ireland winning minors plus the survivors of the early 1960s tussles with Down, frustrated by how close they had come back then and disillusioned by how far off the pace they had been since.

One of the younger group, a future Footballer of the Year, Tony McTague reminisced when inducted into the GAA’s Hall of Fame in 2013.

“We’d been beaten in the senior in ‘61 and that would have shaped all of us young lads as well. I remember being a young lad on the Canal End that year and you can imagine the effect that 1960 and ‘61 would have on a youngster.

“They were the group that started the rise of Offaly football. For me the minor was so important because probably deep down I didn’t think I’d ever win a senior - if I was honest.”

In 1969, they reached the league final for the first time but lost heavily to Kerry, ensuring the rematch the following September would be influenced by lingering issues.

Before the All-Ireland, Fr Scully told Paddy Downey in this newspaper that the setback had been absorbed.

“The team that Kerry beat wasn’t the team that I had trained down the year. I told them that we had a team good enough to win Leinster. They rallied, the spirit came back and here we are.”

Greg Hughes was the oldest member of the team, a veteran of 1960 and’61, and he had no doubt where the credit for the transformation lay.

“Fr Scully is the man who brought us back. His confidence in the team has been inspiring. He transformed the side after the league defeat because he transmitted that confidence to all the players.”

The 1969 final was a disappointment but it was well contested with Kerry winning by just three.

A year later and Fr Scully had been transferred to South Africa but loathed apartheid and returned to this side of the world, working in England, frequently with Irish emigrants. He was still ministering in Dublin at 89 when he became unwell.

In a way it’s not simply a story about Offaly but about all of the counties, apparently becalmed by population and resource disadvantage and the dawning realisation that the biggest days in the GAA are not really for them.

“A small county has to work with what they have. They brought in the back-door system to have All-Ireland quarter-finals and semi-finals. All that means now is that weak counties are beaten twice in the one year and you’re giving strong counties two chances. The idea of weak counties ever appearing again is over.”

His solution was to allow such counties the option of amalgamating. He acknowledged that some mightn’t want to but believed that it would help to level the playing surface.

For some it’s a counsel of despair; for others a sensible response to modern realities that have seen the elites dominate like never before: football’s big two, Dublin and Kerry, have 12 of the last 17 All-Irelands whereas hurling’s big three, Kilkenny, Cork and Tipperary, have annexed 18 of the last 21.

In his elegiac piece in Monday’s Irish Examiner historian Paul Rouse, who acted as caretaker manager for Offaly footballers in 2018, and whose family was friendly with Fr Scully, summed up what the latter tried to gift to the team of 50 years ago - faith.

Just two years ago Rouse writes, the visiting Tom Scully is asked about losing the 1969 final.

In time, however, belief came, which appears miraculous but even more so in these days of debilitating doubt.

1 Gerry Thornley: Talk of Anglo-French hegemony is over the top
2 What next for green jersey hero Sam Bennett after toughest of Tours?
3 Tour de Covid tells us to cheer, clap and don’t ask questions
4 LeBron James has become this generation’s Muhammad Ali
5 The Offload: Saracens prove Pro14 is not fit for purpose
Real news has value SUBSCRIBE